I’m a big fan of constrained writing—the trickier, the better—because it forces me to confront certain limitations and learn to either deal with or break through them. There’s pleasure in that, I think, that goes beyond self-congratulation. Sure, I’ll do a fist pump, but once I get past the initial satisfaction, a question arises: is what I’ve written any good? That’s when the fun begins.

There’s a saying in the NaNoWriMo community: Don’t treat your November novel like a book. Completing a novel is an achievement in and of itself, and the time constraint makes it doubly so. Still, one should not expect the product of a single month’s worth of steady writing to be ready for publication. Said manuscript is, at best, a first draft. The real work starts on December 1st.

I’ve never done NaNoWriMo, but in 2005, I entered the International 3-Day Novel Contest. Here’s a brief summary of how it works: participants write a novel over Labor Day weekend and submit it to the judges, who then select a winner to publish. Think of it as NaNoWriMo on amphetamines.

Why did I do this? There were practical motivations; I was working on a book that was going nowhere and thought a new project composed under pressure might shove me out of my rut. You’ve probably already guessed the major reason why, though. I did it to see if I could. And I did. The end result was more like a novelette than a novel, but I was proud of myself and felt like I had written a winner.

I didn’t. The note that the judges sent months later was very kind, but I wasn’t even a finalist.

By the time I received that note, however, I’d reread what I’d written and recalled this tidbit from the contest’s FAQ: “No writer of sound mind wants an unedited piece of work to go to print and haunt him or her for all time.” They’re right, just like those NaNoWriMo advice-givers are. No matter what, I would have had to revise. The manuscript had good moments, but as a whole, it was a hot mess.

So, I let others read it and collected feedback. I spent months rewriting chapters, fleshing out characters, and adding details. Even with all that work, though, it still wasn’t done. A little over a year later, I abandoned the project. Once in a while, I’d reopen the file and make changes, but for the most part, it just languished on my hard drive.

Strictly speaking, time-based writing projects like the 3-Day Novel Contest, NaNoWriMo, NaPoWriMo, and the now-defunct Script Frenzy, are not constrained writing. There are no requirements for or limitations on content, form, or style. Most writers know, however, that time is itself a constraint because so many things compete for our attention. It’s one thing for writers to set up a writing regimen; it’s another thing entirely for them to actually follow through.

That’s not to say that there aren’t those who keep regular writing schedules and use their time wisely, but if the popularity of time-based writing projects is any indication, there are a lot of writers who don’t. I think such endeavors “work” because they force us to write with equal parts consistency and irregularity, consideration and recklessness.

One hopes that successful completion of a time-based project will translate into something more profound than a fist pump. Many, of course, hope for publication, but there are other victories to be had: developing a routine, learning to push past writer’s block, and building a community of fellow writers. I didn’t do any of that.

I think that’s why my novel manuscript was such a disappointment. I’d succeeded in conforming to a set of rules, but I’d failed in learning anything from them. Instead, I spent several years priding myself in my ability to rise above any writing challenge, largely because I’d written a novel in three days. After all, what else could be more difficult?

The funny thing is, the more constrained writing I did, the more I understood the trick to it. I had to consider form and function, process and result—what kind of text the rules would produce and what objectives such a text could fulfill. Following the rules of a sonnet will indeed generate a sonnet, but that’s no guarantee of the poem’s quality or its suitability to the form. The same is true of any text, really.

About two years ago, I finally dusted off that manuscript. I spent a long time working on it—an hour here, an afternoon there. It was probably the most regular writing I’d ever done outside of a time-based project. I thought about what I wanted to accomplish. I was focused.

This past October, that manuscript was published by the Chicago Center for Literature and Publishing.

The above statistics might suggest that I think time-based and constrained writing projects are silly. Nothing could be further from the truth. But sometimes, you hit a wall. The end words to your sestina don’t work. Your flash fictions run a couple hundred words too long. You don’t meet your daily NaNoWriMo goal.

It happens. Learn. Move forward. Keep your objectives in sight. If you hit lots of walls, reevaluate. Find what’s working and what isn’t. Consider your purpose. Don’t be afraid to try something different. If you succeed, congratulate yourself; you’ve earned it. But, in the immortal words of Han Solo, “Don’t get cocky, kid.” Be critical. Be reflective.

Remember, every day is December 1st. The easy part is following the rules. The hard part is turning what you’ve written into something greater than the sum of those rules.

T.A. Noonan’s latest book is four sparks fall: a novella; she promises that the published version is much better than the one she completed on September 5, 2005. Her current project is a procedural translation/reformulation of Horace’s Epodes. 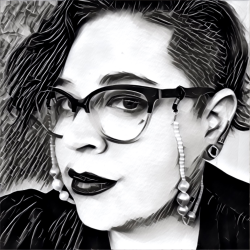 T. A. Noonan
Originally from Brooklyn, New York, T.A. Noonan was raised in the South. She received her BA from Louisiana State University, her MFA from Florida Atlantic University, and her PhD from the University of Southern Mississippi. Her research interests include creative writing, independent publishing, new media, contemporary literature, hybrid and cross-genre texts, and pagan studies.

Her poetry, fiction, nonfiction, and artwork have appeared or are forthcoming in publications such as Hobart, Ninth Letter, Verse Daily, RHINO, specs, Phoebe, and Harpur Palate. "The Trouble with Correspondence," her essay on the intersections of witchcraft and body image, was named a Notable Essay in Best American Essays 2011.

T.A. also serves as Creative Consultant to the Sundress Academy for the Arts, Associate Editor of Sundress Publications, and Founding Editor of Flaming Giblet Press. Besides writing and editing, she engages in many artistic pursuits, such as graphic design, photography, bookmaking, and crafting.

Although she professes a general dislike of Florida, she currently lives on its Treasure Coast with her partner, where she teaches writing and spends her free time cooking, playing video games, lifting weights, and avoiding sunburn.

Latest posts by T. A. Noonan (see all)