My novel The Great Pint-Pulling Olympiad has never found its rightful audience, and that pisses me off. I mean, it’s one thing to be a midlist author with a modest seller on your hands, but it’s quite another to have a book published by an eminent publisher (Grove/Atlantic, in this case) who then does no publicity for it. None. And at the time it was published I had a family and a full-time job with a 100-mile daily commute and could do little to publicize. The novel lay there, like a beached whale. Such a book dies a slow death, and its fate is the kiss of death for the next one. Amazingly, it’s still in print, and I no longer have a job, so there’s still hope.

Of course, part of the problem is that it’s a farce, and a literary one. What makes it literary? Well, it’s “critically acclaimed” and “serious;” in its structure and its language it refers to its own literary predecessors; it contains cultural and artistic allusions; etc. Sounds like highbrow stuff, sure enough. Then there’s the “farce” part: associated with frilly undies and doors opening and closing amid giggling. In short, I could hardly have chosen a less marketable niche if I’d tried, but I didn’t.

As I explain to people who ask me why I don’t just knock off a bestseller or two, then go back to my quirky comedies, if I could knock off a bestseller, don’t you think I would? Quirky comedies are what I write. Farce is what I do. It’s an essential ingredient of literature, specifically comic literature. Actually, it’s an essential ingredient of life, which makes comic fiction the most realistic genre of all.

First, all about me. I’m an American of Irish heritage, a Southerner by birth (Florida), but between the ages of six and twenty-eight I only set foot in this country once, for two weeks, long enough to marvel at air conditioning, even in cars, and huge color TV sets, which were scarcer then where I grew up. Over the years I lived–first with both my parents, then briefly with just one (dad), then for longer, again with just one (mom), then all on my lonesome–in Paris, Geneva, Dublin, Coleraine, Edinburgh, and London. I had an unusual childhood that seemed ordinary at the time, as do all childhoods, but that glows in the irretrievable past, the older I get, like sunset over the Bay of Naples.

Speaking of Italy, when he was around I accompanied my father on excursions to old churches throughout that country, in which he installed electronic carillon bells. Some churches were obscure and decrepit; others, famous and thriving, like St. Peter’s in Rome, where he met and schmoozed with the house priest, a.k.a. Pope John XXIII, who consented to a photograph. Another time I remember us being the only two males in the blacked-out dining hall of a large convent in the high Apennines, while a massive spring thunderstorm raged outside. Power went out just as dinner was beginning. The black-clad nuns’ faces were zombie-pale in the episodic flashes of lightning. They all sat still, pending the pleasure of Providence, until eventually candles were produced, illuminating the good sisters from below, like a painting by Georges de la Tour (creating a de la Tour + zombie effect).

Another bestseller I missed writing was a memoir detailing gross childhood abuse, because there was none. Mine was a peripatetic childhood about which I have no complaints. The memoir I did write, Run Like Blazes, available at your friendly Amazon corner store, mostly describes the picaresque and feckless life I later led, all blame and/or credit accruing to me. There are no painful secrets I’ve never confronted, or if there are they’re secret to me, and long may they remain so. I grew up yearning for girls to fall in love with and failing miserably to get them to fall in love with me, yelling “I love you” at the desired object while (in one case) hiding behind garbage cans outside her house, my fat parts plainly visible behind the cans and thereby eliciting hilarity rather than reciprocal passion. I switched my emotional investment to cars, then books.

But I never felt a belt, or the back of a hand. The worst my dad ever did at home when I was bad, which I seldom was, was snarl quietly, retreat into his den, drink beer and fill the air with blue tobacco smoke while listening to tapes of the bells he had installed. They were filed under their respective countries: Austria; Belgium; Denmark; France; Germany; Greece; Italy.  I inherited many of them when he died. By far the biggest were those for Germany and Italy.

My mother was a woman of great inner resources. In the 1940s she became a sports writer for her hometown paper and interviewed Joe DiMaggio and Primo Carnera. Later, in the ’50s, soon after I was born, she got her pilot’s license and made money on the side by flying high-rollers in her Piper Cub from Miami to the Tropicana and other casinos in Havana. (One of her passengers was Al Capp, creator of the Li’l Abner comic strip.) Many years later, when her marriage with Dad was crashing into pieces, she needed the same spine to get a job at the U.N. in Geneva, which she did when I was 15 or so. Then she told the old man to hit the road. He’d been spending an inordinate amount of time in Germany, probably not installing bells. I went with him once, to Heidelberg, and he introduced me to ladies whose livelihood was on their person. Unless Memory is gilding the lily, we stayed at the Hotel Venus. Again, it all seemed ordinary to me.

So, as a child I lived in beautiful places and learned to speak French fluently and Italian and German passably, with smatterings of Spanish and Russian that, alas, have stayed smatterings. One of the advantages of my mongrel upbringing was the enshrinement of a split personality, a great boon to a writer, especially a comic novelist.

But my international upbringing was a mixed blessing, as it came to mean that I was equally at home nowhere; more importantly, as I realized that I would probably become a writer, I had no homeland to draw upon, of which to become an intimate and authoritative interpreter. So I made up two: the first was Ireland, the land of my ancestors, where I lived with my dad for a year in Dublin, post-expulsion, and later on my own as a student at the University of Ulster and would-be soldier of the IRA. (I took off when the going got tough.) The second homeland was Farce. It seemed an appropriate–indeed, the only appropriate–standpoint from which to observe Life.

I moved from France to New York at the age of 28 to become a writer. First I became a deadbeat, another valuable milestone along the way. Then, inevitably, like father like son, a drinker and a womanizer, although success in the latter pursuit was for the most part more fictitious than the fiction I embarked on. I published my first short story, a close imitation of Frank O’Connor, in The Literary Review in 1987, payment: five free copies of The Literary Review. Gee, thanks, Literary Review! There was, of course, the big payoff, the future prospect of glory. But I’ve never made money from my writing. It’s scant consolation, but no one does, unless they win a big prize. I’ve made ends meet in traditional ways, tending bar, teaching, editing, working in a bookstore. These days I’m semi-retired, although not from writing, and living in Texas, although not voluntarily.

Along the way I’ve written five novels, three Irish, one European, and one American. Apart from The Adorations, subtitled A Novel in Double Time, they all have subtitles including the word “farce:” Killoyle, An Irish Farce; The Great Pint-Pulling Olympiad, A Mostly Irish Farce; The Maladjusted Terrorist, An Irish-American Farce; and Ohiowa Impromptu, A Multicultural Farce.

The first has been published in English, German, and Italian; the second in English and German; the third in German only; and the last, in no language yet, but my agent is trying. I think.

My novels, again with the exception of The Adorations, which is my sole attempt to date to produce a serious, sprawling kind of magnum opus (there’s plenty of satire in it, but no farce), are no less farcical, or comic because of serious content like bomb explosions and murder–indeed, slightly more so, because The Great Pint-Pulling Olympiad is basically a thriller with comic extrusions. And the focus on terrorism and craziness in it and in its successor, The Maladjusted Terrorist, heightens rather than detracts from the farcical elements, because extreme situations are always the prime incubators of comedy. It’s important to attend to the details when people fuck up. If you can’t get that right, forget about being a comic novelist. If you’re too squeamish to enact failure and embarrassment in your characters’ lives, forget about being a comic novelist–or even just a novelist.

I’m currently about one-third of the way through another novel, also set in Ohiowa, tentatively titled What A View! and subtitled An Artistic Farce.

But at the present rate I may have to bribe publishers to publish it–that’s called self-publishing, isn’t it? Such is the condition of publishing. Mind you, it’s never been easy to break in, especially as a comic novelist. Howard Jacobson is one of the pre-eminent comic novelists of the day. He once said, back in the days before he won the Man Booker Prize for The Finkler Question, “It has always bewildered me that people don’t want to read me in large numbers.” Now they do, of course, because of the Booker. But being non-Bookered myself, I share his prior sentiment. I suspect it’s partly to do with being pigeonholed: Oh, that old Jewish guy who writes funny books. Forget him, unless you’re an old Jewish guy who likes funny books. Oh, that Irish guy who writes the so-called funny books with footnotes. Forget him, unless you’re an Irish guy who likes funny books with footnotes. Or even: Oh, the guy who always writes farces. Who wants to read farces?

So anyway: what’s up with farce?

Farce, declares the Encyclopædia Britannica, is “a form of the comic in dramatic art, the object of which is to excite laughter by ridiculous situations and incidents.” Wikipedia tells us that farce “aims [to entertain] the audience through situations that are highly exaggerated, extravagant, and thus improbable. Farces are often … incomprehensible plot-wise (due to the large number of plot twists and random events that occur), but viewers are encouraged not to try to follow the plot in order to avoid becoming confused and overwhelmed.”

I would go further: Go ahead, become confused and overwhelmed. For farce is life, only more so. Life, with its disregard for human dignity, may be tragic, comic, majestic, or mundane, or all at once, but farce can be counted on to show up. 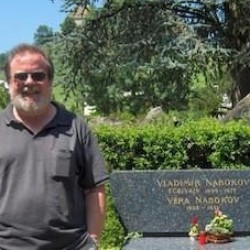 10 thoughts on “Guest Post, Roger Boylan: The Making of a Farce”