The voices that pulse through my literary being are the voices of the American West. They are the voices that celebrate tall tales and oral traditions. They are voices rural, voices plural, voices discursive, meandering, exploratory. They are voices at play, voices that sing. Think of the boisterous sounds at a Thanksgiving dinner table where tales are told, interjections are bold, and laughter abounds. Place names echo Español. Libations flow and, best of all, the night might run til the first cock crows. No one’s in a hurry. Why should they be? Efficiency is not the name of the game. The raconteur reigns.

I was once in a serious relationship where everything seemed to be going right yet ultimately fell apart. There was no centripetal hold. The feeble best I could offer about the breakup to friends who cared for us both was to say that she loved forests, I loved deserts. That worked. It was art, or at least artful. While the words function at a literal level, the force and weight of their meaning loom beneath the surface. The image appeals to our experiences more so than to our logic.

Please read these words aloud: “What is it the wind seeks, sweeping among the leaves, prowling round and round this house, knocking at the doors and wailing in the shutters? O Charity! Every frozen morning for awhile in winter you had a thin little winter moon slung like a slice of a silver Rocky Ford cantaloupe over the sawmill; and then I would go out to the well in the yard and snap off the silver thorns of ice from the pump muzzle and jack up the morning water and stand and look over across the fairy fields at you where you lay like a storybook town, and know that on all the little wooden roofs of houses there was a delicate trail of lacelike rime on the shingles. Then all the chickens and guineas of Charity would be crowing and calling and all the cattle lowing, and the Charity dogs barking (all with a sound that china animals might make if they could crow or call or low), and in that crystal and moonhaunted moment I would stand, dazzling in the first sunray of morning, and wonder what would ever happen to us all.”

The passage opens the second chapter of Texas writer William Goyen’s lyrical novel The House of Breath. The novel, with prose that sings, stands as an exemplar of American belles lettres. Hemingway this ain’t. Often praised by his contemporaries yet overlooked by the broad public, Goyen is mostly forgotten now. He shouldn’t be. His writing, redolent of uniquely American voices, stands outside the mainstream of American prose, the tonal center of which still remains in what Perry Miller once labeled “the Puritan plain style.” In other words say it straight, say it true, and find beauty in simplicity. At its most eloquent best, we get Abraham Lincoln.

Yet it is, as Goyen’s passage illustrates, a limited aesthetic. The admonishments of decades of eighth grade schoolmarms aside, we don’t all need to write like Ernie and Abe. There is a certain irony in the general exclusion of the discursive voices of the oral traditions. Voices quintessentially American find themselves outside of the plain style tonal center of American literature. To shift metaphors, there have been occasional cracks in the concrete, places where orality and discursiveness poke through, a nimble weed here and there sets root, takes hold, and pushes apart a jagged break in the sidewalk. Twain and Whitman come first to mind as writers who have written discursively (Roughing It, anyone?) and celebrated the vernacular. Yet even Twain gets nudged to the margin as a “regional” writer, i.e., as one writing in a voice that comes from those places (“out West”) never quite reached by the Puritans.

So where today are those whose taproots push apart the sidewalks? Some writers that accomplish this today are actually discoveries from the neglected past, e.g., Zora Neale Hurston. Others are recognized as great writers of voice. Sandra Cisneros, for example, is that skinny tree who displaced concrete to grow tall and sturdy. Her wonderfully plotless (wonderful because it is plotless) House on Mango Street carries itself as a tour-de-force of voice. Listen: “But my mother’s hair, my mother’s hair, like little rosettes, like little candy circles all curly and pretty because she pinned it in pincurls all day, sweet to put your nose into when she is holding you, holding you and you feel safe, is the warm smell of bread before you bake it, is the smell when she makes room on her side of the bed still warm with her skin, and you sleep near her, the rain outside falling and Papa snoring. The snoring, the rain, and Mama’s hair that smells like bread.”

I like to count myself as writing against the predominant tradition as well. My successes as a writer have been modestly steady, if limited. I attribute that more to teaching 5 and 6 classes per semester for 30 years than to the fact that I write against a 400-year-deep current of tradition. But writing against tradition does make demands of readers accustomed to the literary comfort food of reading within a predominant tradition and that fact alone will limit publication. The feeble best I can offer in explanation of that condition is to say that in a culture of readers that love dense forests, I write from a love of sere deserts. It’s a much smaller audience. 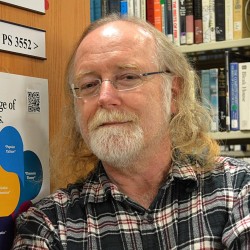 Michael Berberich
Michael Berberich has recently been featured in the fall issue of Notre Dame Magazine. He recently received a grant from the National Endowment for the Humanities for co-authoring the piece, Coastal Culinary: Exploring Food Narratives. And his writing can be found once or twice a year for the Texas Community College Teachers Association newsletter, Messenger.