I didn’t become a trapper during my first winter in Alaska because I aspired to be the last mountain man. I lived in Fairbanks, and about halfway through December a family of squirrels started to eat the insulation out of my roof.

It gets cold in Fairbanks in the winter. Really cold. My fiancé, Mollie, who is also a writer, says that the winter can be hallucinatory. The only time I’ve ever been colder came during the season I spent at South Pole Station, Antarctica. There are no squirrels at the South Pole.

The damn squirrels burrowed into my eaves. They scattered pink insulation onto the snow like confetti. At three in the morning, the whole family scampered to a spot just over my head and scratched woodchips down onto my face. More than once, I woke up with hives because chunks of fiberglass had found their way onto my sheets. The squirrels chittered and chattered and systematically replaced my perfectly good insulation with a spruce cone cache. Spruce cones, you should know, are not very warm.

I had to do something—I was desperate. So, I borrowed a crate of number one marten traps from a guy at work, baited my sets with a smear of peanut butter, and pretty soon the bodies started to pile up.

I started getting more sleep. My heating bill stabilized. But something about a killing those squirrels didn’t feel right, and I couldn’t bring myself to toss the bodies into a dumpster. I left them dead and frozen in a bucket on my porch. I guess it had something to do with use value, with wanton waste.

Even in death, even though they’re just squirrels, I imagined they might still have some worth. I thought: life isn’t confined to a singular purpose—and that also applies to tree-dwelling rodents. The meaningful steps of existence branch outward, downward, to leaves and roots and connected sinews, shifting and expanding, taking on new roles and titles, just as I am not merely a ‘writer,’ but am also a teacher, a hunter, a gatherer, a meaning-maker, a preservator. It occurred to me, as I contemplated what to do with those squirrels, that all creatures carry a multiplicity of talents, and so I couldn’t throw the bodies into the dumpster.

Instead, I opened a copy of the University of Georgia Extension canning cookbook and found a recipe for canned squirrel: “Soak meat one hour in brine made by dissolving one tablespoon salt per quart of water,” the book said. “Rinse. Use preparation procedures and processing times recommended for poultry, omitting the salt.”

In Irma Rombauer’s Joy of Cooking, I found no fewer than five recipes for prepared squirrel. I asked around to see if anyone had ever eaten squirrel.

“Down south I have. Up here, not even the pine marten eat them. They probably taste like a spruce cone,” said the guy who had loaned me the traps.

I wasn’t deterred. When I had a hal f-dozen squirrels in the bucket, I brought them inside and set about the task of turning a nuisance into a meal.

You should know that these were not the fat and fearless squirrels that inhabit university quads across the lower 48. The red squirrels in my roof were smaller, chipmunk size at best, with thick fur and muscles made for life at 50 below zero.

It took two hours to finish the skinning and deboning. When I was done, I hadn’t even harvested enough usable meat to fill a pint jar. My plan was a bust. I tossed the meat scraps in a Ziploc and they spent the next two years getting freezer burned. Eventually, I did what I had tried so hard to avoid. I threw the meat away.

It’s been half a decade since my first winter in Alaska, and the need to reconcile those things that must, by necessity, be destroyed has only clarified with the passing seasons. I’ve discovered that my attempts at preservation aren’t so much efforts in sustainability, but part of the practice of discovering diversity. If only the garden’s harvest will help me remember last summer, if only the fur hat can help me retain warmth, if only my essays can teach me to understand my own motivations, then I will know that balance is possible.

Like the failed attempt to can those squirrels, I don’t always find a way to that perfect place where everything becomes multi-functional. But I try, and some of it seems to work. Mollie is an avid gardener, and even the flowers she grows –nasturtiums—are edible. The trees in our yard, which must be cut as a fire buffer, become winter firewood. This fall, our cupboard is filled with jars of smoked salmon, and halibut spills from our freezer. When possible, we render the unused fish heads into winter food for our dogs. Weekend hiking trips have begun to double as berry-picking expeditions.

When everything must have some pragmatic value, it’s easy to lose track of the deeper impact of language. As a new English teacher at a small college up here, I don’t always balance the needs of my students with the demands of my own writing. I struggle constantly to find the space where the story I want to tell and the poetics of describing it fit together properly.

Often, before I go to bed, I will open the cupboard and marvel, not at what we have preserved, but at the array of colors, at the beauty of food encased in glass. Standing there, I imagine a world where everything becomes useful, becomes beautiful, a world where I will have time to write and still manage the thousand other activities I have taken on, where I can find a way to make positive use of the troubled parts of myself.

To find symmetry amid such diversity is an act of almost religious significance. Like finishing the last stitch of a quilt and panning outward to discover a work of astonishing complexity, I believe these connections can draw together the limitless parts of myself. Still, the fact remains: there is no jar of squirrel on those shelves. One does not achieve balance without casualties. 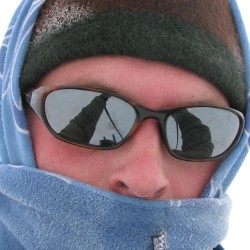 John Messick
John Messick's essays have appeared in Tampa Review, Mud Season Review, and a number of other journals. His work has been awarded the AWP Intro Journals Prize in Nonfiction and won the 2015 BioStories "Elders" Contest. He currently teaches at Kenai Peninsula College in Soldotna, Alaska.

2 thoughts on “Guest Post, John Messick: Remarks on a Jar of Squirrel”