My first full-length collection Submerged (forthcoming, ELJ Editions, 2018), came about from a nasty case of writers block and meeting the right reader at the right time. Of course I had the urge to write, I just had nothing to write about. I would sit at my computer and think of nothing. For hours and days. Everyone runs into this, but I didn’t expect my writers block to turn into something publishable, let alone a book, to say nothing of a book about a single, unified idea: the coming water.

At first I came up with a simple exercise: I would just type for as long as I could type. Nonsense or whatever, if it came out of my fingertips it went down on paper. I tried to type at least one full page a day – no breaks, no punctuation, just a block of text. The next day I’d start from where I left off. After a full month of doing this I had 40 pages of block text, most of it incomprehensible. Then I started digging. I went line by line looking for good ideas. I would look for good opening lines and good closing lines, and for any fully-formed ideas. If a line was horrendous I would leave it and just move on to the next for fear of erasing anything, even a bad line, which might find itself useful later on. This actually took a good two months or so, and eventually I began to see certain patterns. Water, for one, popped up everywhere. I had been having dreams of water frequently.

When I was young, my family and I would often vacation at the Jersey shore, staying at a bungalow right on the boardwalk with an uninterrupted view of the ocean. I would have nightmares of the ocean pouring in over the beach and sweeping us all out to sea. It was horrible. But I found those dreams starting to creep into the text. I began to cut away everything that wasn’t water related. The text was beginning to take a more definitive shape, with everything relating to the water and these dreams I had been having about it. Individual poems began to come into a clear focus. And then hurricane Sandy hit.

Like many, I suffered from losing many possessions to the storm, but I survived without any physical harm. The mental harm though, was great. As I worked on this massive chunk of text I began to add to the parts about water with events that happened during Sandy. I didn’t start out to write a series of poems about a hurricane, but it all fit together so well, like a puzzle, that I had to do it. It was almost as if the writing about the water was a kind of premonition.

Eventually I whittled the original hunk of text, along with the additions of the Sandy-related pieces, to stand-alone poems, close to 80 pages worth. Then I re-read them again and finally selected 40 poems that felt coherent and related to each other and retained the feel of what I wanted to do but still could stand on their own. I was quite happy with them, but it wasn’t “book-length” and I was pretty sure I had dried the well while writing it. I put it away in the spring and that summer packed my bags for the Bread Loaf Writers’ Conference.

At Bread Loaf I had the good fortune to meet some amazing people, including my workshop leaders Tom Sleigh and Brian Russell. Tom and Brian were the first readers of this new work I had been working on for over a year by this point. I took their suggestions seriously, especially Tom’s idea to include some prose sections, much like William Carlos Williams had done with Paterson. Having been born in Paterson, I thought that this was the greatest idea that ever came to be. I read a slew of books Brian recommended and took Tom’s advice to start writing prose pieces that aligned with the theme of the rest of the poems. It only took a good year and close readings by my friends Anna Guzon and Brian Simoneau to get the whole order and pacing of the manuscript right. But what I ended up with was a full manuscript that looked and felt right to me, and thankfully that sentiment was shared by Ariana D. Den Bleyker and the good people at ELJ Editions, who picked it up during their annual open reading period.

What had started out innocently enough as a little writer’s block breaking experiment is now forthcoming in early 2018 as a book titled Submerged. I hope my next bout of writer’s block works out as well. 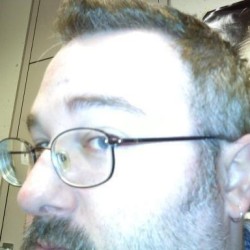