A writer friend was visiting from North Carolina. She is a country girl, lived—at the time—in an Airstream in the woods. She posts online pictures of her view sometimes (not too far from civilization to have access to WiFi) and it couldn’t be more different from mine. Trees, dense and green, mountains and untended ground cover. Me, I have trees out my window, too, the third floor of a six-flat in Andersonville on Chicago’s Northside. One tree grows so close to the building that squirrels jump from its branches to a ledge outside our window, dash across to where they can vault to the flat roof of the duplex next door. It drives our cat Pablo insane, this run of squirrels on the other side of the glass, close enough to make eye contact. The wild he can see and too, the wild it sparks in him. Philip (my husband) and I have come to call this Squirrel Highway, and we watch the show of it from our seats in the sunroom.

We—Philip, Pablo and I—live on a Chicago side street, a place of multi-family buildings and the occasional single-family house, small strips of grass that are not quite yards. Mostly sidewalk and street out front. Cars parked bumper to bumper, except when it snows, and then, between the cars covered in heaps of white powder, shoveled-clean spots with kitchen chairs and garbage bins and yellow police-type tape (we can buy it at the Ace Hardware down the block) stretched between broom handles sticking up in the snow. “Dibs”, we Chicagoans call this practice. As in: “I was up in the early morning dark and subzero Chicago winter weather to shovel this small patch of territory out, buddy. I call dibs.”

But this time when my friend visits, it is autumn, early autumn, and the trees are still leafy and the air is only slightly chilled and we have gone out for a walk to my favorite bookstore three blocks away. Women & Children First, an independent that despite the odds (Barnes & Noble, Borders, Amazon) has been in operation since 1979.

We are strolling, in no real hurry, book-talking and catching up. The city bustle is behind us back on Clark Street where it never seems to stop: buses, a taxi garage open 24 hours, bars and restaurants (fine and casual), firetrucks with lights and sirens going, a small (wonderful) bodega that sells both PBR and craft beer, fresh produce and canned vegetables, expensive organic and gluten free stuff, toilet paper and brightly colored hard candies in plastic packaging labeled with Spanish words or Asian lettering.

On my street, a small branch of Chicago’s famous grid system, there isn’t much going on. Middle of the day in the middle of the week. Ahead of us, a half-block away maybe, is an animal walking off-leash on the sidewalk.

Dog, I think, and maybe say. A little irritated because it is without a human, and I have once been bitten badly in this city by an off-leash, un-humanned, “friendly” dog.

“I don’t think that’s a dog,” my friend says. The animal, large, gray, slows ahead of us, sniffs things. It looks a little ragged. We cross to the other side of the road, watching.

This neighborhood used to be called Uptown, but in Chicago the borders of these places are movable, depending on realtor input. Uptown was a little scary when I was growing up, gangs, poverty and territorial divisions that made some people angry, made some dangerous. Now though, after years of encroaching gentrification little by little, we call it Andersonville, like they call the more desirable blocks with big houses and pretty graystone two-flats a quarter mile away on the north side of Foster Avenue, long ago home to working families of Swedish descent. It is a satisfyingly diverse neighborhood these days, a little grubby and a little grand, and I’ve lived here close to ten years.

I pass my neighbors as I walk along my street on the way to the El in the mornings. There is the paid dog walker with dreadlocks and a red hoodie and five pooches of various sizes pulling in different directions on their leashes. “Morning,” I say. “Yup,” he says. There are the two Asian women who tend their gardens in front of the apartment building three doors down from mine, squatting low and pulling weeds, pushing their wide-brimmed hats back from their foreheads to answer when I say hello. And there is the Cambodian Buddhist monk walking toward me, his saffron robes flapping at his legs. “Good morning,” I say, and make eye contact. The first time I did this, he looked slightly startled, although not displeased. “Mmm mmm,” he said in response, not sure of his English yet, or maybe not sure of me. He looked quickly away. That was a few months ago. Now, after almost daily passings, he holds my gaze, says clearly and with a smile, “Good morning.” Sometimes even before I do. There is the man who lives down the street in the two-flat where a Princess Leia (rest in peace) poster facing outward used to hang in the front, first floor window; he wears bottle-thick glasses and sits on his front stoop with a mug of coffee in his hands and nods when I say hi, smiles like we might really (after ten years) know one another. We don’t, despite how close we live to one another; I don’t know any of my neighbors, but I have watched them and imagined (and occasionally written) their stories for years.

My writer friend who lives in the country is a traveler. She has driven all over the United States, lived in different parts of it for weeks at a time, writing, writing, writing. She is one of those writers who does not believe the old adage “write what you know,” but instead is inclined to “write what you want to know, write what you can learn, write what you discover.” It is her curiosity that informs her writing, that makes it strongest. It is as if the writer in her is not fully satisfied with only what she sees out her window every morning.

I thought, when I started this piece, that it was going to be about writing, about craft. That coyote, I thought, unexpected and slightly exotic on the city sidewalk, was going to be a metaphor for the wild possibilities in even the most pedestrian (sidewalk, get it?) of stories. The extraordinary in the ordinary. And maybe it is that. But as happens with all of my writing, I don’t really know what it is about until I have written it. So let me see.

My writer friend and I stand still near the grass on our side of the street and the coyote swivels his big head toward us. He is a handsome boy (or girl) with a sharp snout that looks almost more feline than dog-like; he reminds me of our skinny Pablo: pointy face, ribs like framework showing under his coat, impressively long tail. We don’t move nor does he, a game of chicken on opposite sides of the road, only despite this wild sighting, my friend and I aren’t afraid. We know somehow, there is no danger here. Wild is not always dangerous. Then a battered-up car with a rubber-band engine passes between us and him, and when we look again, the animal is gone.

I have written this moment over and over again in my journal. Looked at it from all angles. A couple on a first date in a short story see the coyote at night, his wildness sends them into an alley where they press against one another against the wall of a building, breathing heavily and biting one another’s shoulders. A mother, already overly protective, in another short story sees the coyote and keeps her kindergartener out of school for the day. And then for the week. And then for the month. She lies to her husband when he goes to work in the morning. Sometimes, I write it simply like this: I saw a coyote today. On the sidewalk. I saw a coyote. A coyote.

I think I want it to be a sign, this sighting. Something that tells me something else I do not yet know. I haven’t yet figured out what that is, but that doesn’t keep me from wanting. From wondering.

And so maybe this is not a piece just about writing, but about the yearning toward wonder. (Or are those the same things?) About how living in this crowded place in the city, where noise and bustle is just a block away, makes me wonder daily—like a writer should. Who are you? I wonder when I stand on the Argyle El stop platform on an early Saturday morning and a woman in a midnight-colored, shimmering sari and a yellow down jacket stands shivering under the heat lamps; when, at noon, two tuxedoed men holding hands (obviously in love) climb aboard the 22 bus heading toward downtown. When I hear the sounds of what might be prayer from the Cambodian Buddhist Temple down the block. What are you saying? When a coyote walks casually down my city street. Where are you going? How did you get here? What is your story?

It is winter now, and the snow has begun to fall in the city. I hear outside my window the sound of shoveling, of making a “dibs” spot. I hear those sounds I will hear over and over again after the long Chicago’s winter, car wheels spinning and spinning and spinning, engines gunning. That stuck sound. People trying to get out. And when that happens, I understand that, too. Escape. Escape. Like my writer friend in the woods did so often. Like the coyote did when we had our heads turned. Escape. Escape this place where after months of cold and snow I sometimes fear my wonder will freeze over.

But just a couple of days ago it was autumn, at least that’s what it felt like, chilly but not cold, the earth warm enough to still be green. Where my friend lives in North Carolina, there is a drought, there are wildfires. The view from where she lives now, I imagine, is still pretty, but there is smoke at its edges and the ground cover is brown, dead. Her view, like mine, like all good views, must keep changing. A couple of days ago, it was windy here in the city, bits of paper were strewn in the grass and the gutters, advertisements for cleaning ladies, menus for delivery, homework on loose leaf blown from the clutches of children, other scraps blown from where they had been slipped under windshield wipers, or into mail slots or in the diamonds of metal fences. Now the snow has covered the scattered debris. It is white outside, the snow making everything new again, clean: streets and sidewalks and front stoops, and all the places in between.

If I stand up from behind my writing desk and look out the window, I might see the Asian women and the man in thick glasses shoveling their sidewalks. I might see the Cambodian Buddhist monk walking briskly down the street toward the bodega, his saffron robes flying out from under his parka, his rubber boots covering his bare legs almost to his knees. There will be small, wild footprints out there, too, in the strips of yards, in the middle of the street. The dog-walker has been through, probably. The squirrels.

Or maybe it was a coyote. 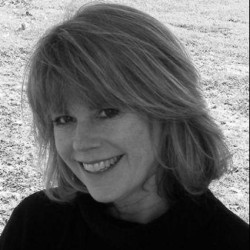