In the 1820s-era illustrations, Megalosaurus is a lumpy, stumpy creature. It looks like it has recently gorged, like it might fall over any second. Even in the best depictions from the time, Megalosaurus has a ridge of bone for shoulders, and crouches on four squat legs that look like they’ve been borrowed from a Komodo dragon. Before Megalosaurus was labeled with the word “dinosaur,” its femur was thought to be the leftover bone of a Roman elephant, or maybe a giant’s fossilized scrotum. The early paleontologists—another new word—tried their best, but with only a handful of bones, their imaginations substituted for science.

early Megalosaurus looks downright normal compared to Peale’s mastodon—a reconstruction of Mammut in which the tusks are mounted upside-down, carving back to the body. Imagine the tusks as sabre teeth, larger than any Smilodon. And since at the time it was still thought that these enormous, possibly carnivorous, mammals might roam the American frontier, Mammut was downright terrifying.

I’m fascinated by these early reconstructions. By the process of the men—almost always men, of course—who pried open crates of bone. This was a time when the acquisition of fossils emphasized not meticulous collection but speed and quantity. I think often of prying open a wooden box and gazing at the jumble within, trying to make sense of what the dark holds.

I imagine that it felt, a little bit, like writing a poem.

This past August, I was invited by my friend and Georgia Southern University colleague Dr. Katy Smith to the Western Science Center in California. The Center has mastodons and ground sloths: its prize specimen is Max the Mastodon. I wandered in the collections—which, because I am more accustomed to libraries, I kept accidentally referring to as the stacks—opening drawers and gazing at fragments of bones and teeth. The idea of assembling the splinters into something meaningful seemed both monumental and magical, impossible yet necessary.

Fragments, construction, collections: even the language of paleontology mirrors poetry at times. The labor of the paleontologist and the poet can be lonely, even tedious. The first draft of any poem is a construction, and like an early depiction of an Mammut or a Stegosaurus (who debuted in the 1880s with a second brain in its ass), it’s really just a collection of best guesses.

Paleontologists call these reconstruction errors. Museums have to update displays, paint over old murals. If you are Edward Drinker Cope, you build the Elasmosaurus with its head on its tail, not its neck. If you are Charles Willson Peale, you don’t get around to correcting the mastodon’s tusks until decades later. Whoops. We writers might call it revision. If you are a poet, you write the first draft and let it sit a bit. Then you come back later, and you see all the things you got wrong the first time. You sit back down and you break the poem apart and you try again. This time, maybe, you get a little bit closer.

Recently, my writing group challenged each other to create a new poetic form. I call mine the Mastodon, in honor of Max and the Western Science Center: it’s an update, a do-over. But you don’t hide or erase your first construction; instead, you use it as the material for your second version, and that first meaning informs the second. I set the limit at just 11-13 sentences to start. That feels fair, since most fossil discoveries are equally limited: rarely are complete skeletons found. Rather, it’s a jaw here, a tooth over that ridge.

You can make small edits to language or line breaks or sentence structure as you see fit; after all, the fossil record is always being updated. But when you have your two poems, don’t hide the first Construction in the back room of the museum; the power of the form comes in the side-by-side comparison of the two versions. This lets the reader see what you changed or edited, and how the narrative or meaning might have shifted.

Comparing the 19th century images of Megalosaurus to our current version is a little like looking at a AMC Gremlin parked next to a Lamborghini. One looks like a sleek machine and one looks like, well, a boulder. Yet I still have a soft spot for that first Megalosaurus. (Not Peale’s mastodon, however. It’s terrifying, even just on Google Images.) I think it’s the same affection I hold for early drafts, even the clumsy ones.

First drafts of anything, whether they are mastodons or poems, are a tentative stab, a leap. Even if they are later revised—even entirely disproved—they are what get us rolling in the first place. Those early reconstructions of extinct beasts were clumsy, to be sure. But they represent someone’s best guess at finding a shape, a form. Of making sense of shards lifted from crate and straw, and brought into the light. 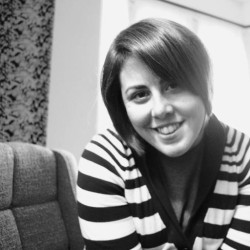 Christina Olson
Christina Olson is the author of the collections Terminal Human Velocity and Before I Came Home Naked as well as the prose chapbook Rook & The M.E.: A Law & Order-Inspired Narrative. Her poetry and nonfiction has appeared in Arts & Letters, VQR, The Southern Review, Brevity, River Styx, Gulf Coast, Passages North, The Normal School, Hayden’s Ferry Review, and The Best Creative Nonfiction, Volume 3. She is the recipient of fellowships from the Vermont Studio Center and Willapa Bay AiR. Born in Cincinnati, raised in Buffalo, she teaches creative writing at Georgia Southern University.