The shower has long held the title of “Place Where the Best Ideas Come To You,” but I would humbly submit that a close contender for this title would be the treadmill. I would also humbly admit that the idea that came to me weeks ago on my last treadmill run was not wholly my own, but inspired by that most august of 21st century muses: an audio guide on my running app.

After writing, running is my second love, but for many of the same reasons that writing is my first: the tendency for it to be a solo activity, the flexibility for it to be a community activity, the simplicity of tools/gear needed to do it, the need for persistence, focus, and self-determination, the way in which fundamentally your biggest rival is really yourself. I only started running the year I graduated from college, and since then I’ve logged thousands of miles and completed dozens of races, some of them half marathons.

And then I became a teacher. And suddenly running time was in shorter supply than I had ever known. The runs themselves grew shorter than the list of reasons why I couldn’t go for one. Races—deadlines of a sort—became goals to cram for, sometimes at the risk of injury and occasionally at the expense of the same. Now in my 4th year as a teacher my second love has become more acquaintance than partner; my first love has fared much the same.

I am not special. The teaching/writing life is a well-worn one that has made or broken many a writer, or for most of us it’s made us want to break something. The underlying assumption driving this maddening symbiosis is that writing time is valuable and so should be the fruits of any such time. When this isn’t the case, it’s hard not to think that the time could have been better used on work. Likewise, a run that gets off to a bad start makes you think “Maybe I should have just gotten straight to my grading,” or “Now I have even less time to plan that lesson.”

For a while now I’ve been thinking on and grappling with this reality. Last year at AWP in Portland, OR, I presented on a panel about maintaining a beginner’s mindset in the classroom. Panelists wrote, shared, and discussed poems inspired by the work in the classroom around writing novices and amateurs, stressing the point that putting yourself in the mindset of someone writing for the first time—all the risks and mistakes and clichés included—is a liberating and rejuvenating activity vital to the writing lives of teachers and other professionals. I didn’t know it at the time, but this experience would be the first key advice shouted trying to bore its way past the writing impasse and into my ear.

Then came through the other ear (quite literally) this running advice from my audio guide: focus on running the run you can rather than the run you want to (paraphrased, but shout out to Coach Bennett). It’s a corny image, isn’t it? A writer on a treadmill nearly knocked over by a prerecorded, linguistically basic piece of advice that ought to make any beginner think “Well, duh.” But that’s the whole point: the fundamentals. It reminded me of the start of my karate classes as a high schooler, watching highly ranked black belts spend several minutes practicing simple punches on a punching bag when they were capable of high flying kicks. The kicks aren’t the goal and the bag isn’t your adversary—the perfect punch is both.

Sometimes experienced writers can be quick to forget or even snub the wisdom of those early, foundational years. Count me among those who have strayed down that path. Count me, too, as the hypocrite who has told students glibly that writer’s block is a myth and that what the sensation really means is that you need to push through your bad writing to get to the good writing, then turns around and throws up his hands as his own inability to get started on a writing project.

Humble pie is bitter but nutritious, and the slice served up by my audio guide has been fueling me ever since. The crappy draft poem writing is all the same as the flashy and deft poem writing; the smattering of blasé lines scrabbled together on a piece of looseleaf but containing one solid image, one beautiful sentence, is valuable in its own way; the one or two mile run you’re capable of right now is more valuable than the six or eight mile run you want to do but, for now, is out of reach; keep it as a goal, something that you aspire to much as a beginner might.

I’m lucky. I have an MFA, a book published, and a few awards to speak of. Rather than finding myself in a false position of grandeur, I’m finding myself back in that beginner’s mindset. I find myself asking “How can I write another good poem?” while simultaneously thinking “Shouldn’t all your poems be good?” And yet, I’m finding myself lacing up for a half marathon knowing I haven’t so much as run a 5k in months. I’m finding myself pushed, externally and internally, for a specific set of writerly goals: “Write this often,” “Write this way,” “Write at this level all the time.”

Writers must learn to replace these impostor mantras with simpler affirmations. A good poem and a bad poem both have in common that they are poems; good and bad runs share the same stride that can get you a few feet or a mile; the same twist of the hips lands weak and strong punches alike. Ignoring where you started is as flawed as assuming you know where you’re going. So for me, my starting and finishing point going forward is one and the same: write the poem you can write. That’s it. Sometimes you get lucky and write a stellar draft, or run miles at your best pace; sometimes each mile feels like a ball and chain around your ankle, or the poetry refuses to come clean out of the pen no matter how much you drag it across the page. But no matter your level of experience, the path of progress is that of a beginner. Keep punching out works on the page. Keep punching the bag—the only thing standing between you and that perfect strike is yourself. 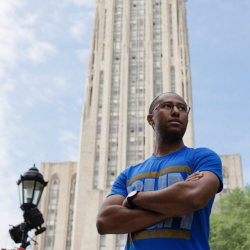 Follow me
Cameron Barnett
Cameron Barnett is a poet and teacher in Pittsburgh, Pennsylvania. A quasi-native of the city, he attended Taylor Allderdice High School, and later received his BA in English from Duquesne University in 2011, where he was the recipient of the O'Donnell Award for Excellence in Poetry. He holds an MFA from the University of Pittsburgh, where he was poetry editor for Hot Metal Bridge Literary Magazine, co-coordinator of Pitt’s Speakeasy Reading Series, and winner of the 2014 University of Pittsburgh/Academy of American Poets Graduate Poetry Award. His work has appeared in or is forthcoming from Superstition Review, Rattle, TriQuarterly, and IDK Magazine, among others. He currently serves as an editor for Pittsburgh Poetry Journal. Cameron’s poetry explores the complexity of race and the body for a black man in today’s America. His work has been nominated for a 2016 Pushcart Prize, the 82nd Annual Anisfield-Wolf Book Awards, and the Rebekah Johnson Bobbitt Prize. He is the recipient of a 2019 Investing in Professional Artists Grant Program, a partnership of The Pittsburgh Foundation and The Heinz Endowments; he is also the 2019 Emerging Artist Awardee for the Carol R. Brown Creative Achievement Awards, co-sponsored by The Pittsburgh Foundation and The Heinz Endowments. He is the author of The Drowning Boy's Guide to Water, winner of the Autumn House Press 2017 Rising Writer Contest, and finalist for the 49th NAACP Image Awards for Outstanding Literary Work in Poetry. An avid fan of the Pittsburgh Steelers, Penguins, and Pirates, he enjoys reading, writing, running, playing card games and board games, hip hop, following politics and current events, and challenging people to beatbox battles. Cameron teaches middle school language arts and social studies at his alma mater, Falk Laboratory School.

Follow me
Latest posts by Cameron Barnett (see all)

3 thoughts on “Guest Post, Cameron Barnett: Write the Poem You Can Write”