Our creative writing group is gathered around a table at the back of the local coffee/chocolate/artisanal wine shop. Behind us, elaborate chalkboard drawings of owls with variously widening eyes denote the levels of caffeine available in the shop’s custom brews and infusions. Over time the chalkboard has been brushed against, with only half of the drawings still visible. Most of our group members work at the same school, and we meet once a week to try ‘writing in different directions’ – that is, purely for ourselves, separate from the email vents or lesson-planning typically done during the work day. One of the group’s rules: no school business during writing time.

We are just settling down to brainstorm writing prompts when one teacher arrives late, flustered, and immediately launches into a story about an email exchange with the parent of one of her students. Several members glance around the shop, scanning for possible parents or district administrators. Others shift, making slightly discouraging sounds, which are ignored. Another teacher arrives, saying after a beat, “Oh no, we’re not talking shop, are we?”

To which someone suggests, “Well, we don’t have to. We can start our own conversation bubble.” And then she compliments the sunglasses the other is wearing, and the new arrival, unaware of the general discomfort or agitation of the venting teacher, happily begins chatting.

Now, anyone who has been around elementary or secondary teachers will notice an interesting phenomenon – their voices tend to rise throughout the day, and for the first hour or so after school, many remain in ‘teacher-mode,’ speaking in a ringing tone modulated to be easily heard and understood in a classroom filled with restless students.

The new conversation picks up in volume – and the venting teacher increases her volume as well. All three voices continue for about a minute in real time without one deferring to the other, making it impossible to clearly hear any of them. Afterwards, a sudden quiet falls. I wait to see if anyone will comment on what has just happened – and realize, with a start, that the ‘anyone’ in our group most likely to make a joke or light remark is me. But the venting teacher is looking down, and it’s impossible to read her mood. Irritation? Near tears? Relief? Not wanting to possibly hurt her feelings, I stay silent. Then it’s over, and we go on with our prompts. It is strange and awkward, but to me it is also fascinating, exposing for a moment those rules of conversation – role, deferral and dominance – that are usually hidden, largely intuitive, and only noticeable when they are not followed.

It reminds me of my own various internal voices, how they shift and fight one another, and all the things I do as a writer that either get in their way or give them room to play out their own dynamics within my poems. Many poems that most interest me are those where voices are given ample space to contradict one another, rather than being directed into a more unified whole. I don’t mean to imply a value judgment, that one is inherently better than the other, only my own personal preference. And it is, of course, simply an aesthetic preference – even seemingly chaotic voices within an effective poem are still being controlled or directed in some way, in order for the reader to engage meaningfully with the language.

Some poets cut between voices so well the shifts barely register, as when Larry Levis’ speaker in “In the City of Light” says: “My only advice is not to go away./Or, go away. Most/Of my decisions have been wrong.” The authoritative voice appears and is spun so quickly, we hardly notice it (although it is easier to hear when read aloud,) in part because the surfacing of contradictory voices within Levis’ poems are consistent with the ‘larger voice’ of his poetry as a whole.

But even poems whose voice tends toward the oracular, a type of poetic voice that Wallace Stevens mastered, can also embrace ‘authoritative contradiction.’ In his “Notes Toward a Supreme Fiction,” Stevens declares: “It must be visible or invisible,/Invisible or visible or both:/A seeing and unseeing in the eye.” The voice in these lines seems to split into two mirrored, equally weighted voices, each scriptural in its authority, and Stevens allows them to remain so without imposing a third voice to mediate their contradictions.

Again, I don’t intend to make an argument for one treatment of voice over another in anyone’s writing – writers who are well-read and observant tend to intuitively work voice out on the page for themselves over time, just as people do in real-life conversations. It is wonderfully instructive, however, to be present and aware in those transgressive moments when a voice from all our ‘multitudes’ breaks free and surfaces, however briefly, to insist on its existence.

Levis, Larry. “In the City of Light,” from The Selected Levis. Pittsburgh: University of Pittsburgh Press, 2003.

Stevens, Wallace. “Notes Toward a Supreme Fiction,” from The Collected Poems of Wallace Stevens. New York: Alfred A. Knopf, 1965. 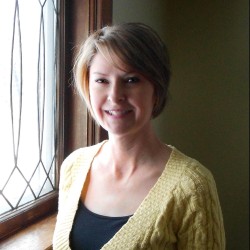 Virginia Smith Rice
Virginia Smith Rice earned her MFA in creative writing from Northwestern University, where she received the Distinguished Thesis Award for her poetry manuscript, One Voice May Survive the Other. Her first full-length poetry collection, When I Wake It Will Be Forever, was published in 2014 by Sundress Publications. Her poems appear in Cincinnati Review, Denver Quarterly, Meridian, Rattle, Superstition Review and Third Coast, among other journals. She is co-editor of the online poetry journal Kettle Blue Review and associate editor at Canopic Publishing.