As an English Literature major, I’ve studied Hemingway, Nabokov, Bronte, Chaucer, Shakespeare…and the list goes on. There’s something all of these writers have in common: they aren’t living. Their voices are frozen in the past.

Can you think of any living authors that you love to read? There was a time when I couldn’t list many. On the Superstition Review intern application, our editor Patricia Murphy asks for three of your favorite living authors. When I saw that I thought, “Living? Why? All the good ones are dead!” Looking back, I can’t believe all of the authors I was missing out on reading. If you browse through the contemporary authors in Superstition Review’s Goodreads bookshelves, you’ll see these authors are writing lots of books and they are all a part of a thriving literary community. If only we would put down Faulkner, Fitzgerald, or Frost, pick up one of their books, and join the conversation. When I began to use Goodreads, the social networking site for readers, I found that Margaret Atwood, along with some of my other favorite authors, has an account there as well.

Contemporary authors are not only writing books: they’re tweeting, collaborating with a publisher on a Q & A session, or speaking to college students. Simon J. Ortiz is speaking to my Literature of Immigration and Diaspora class this semester. Michael Ondaatje came to ASU’s Tempe campus to hold a public discussion. Margaret Atwood is an activist of environmental preservation in Canada, and she uses Twitter and Goodreads to connect with her fans and promote environmental awareness. Alice Munro is the literary voice of the Canadian middle class – she is referred to as “the Canadian Chekhov” – and her new collection of stories was just published. Dickens or Dickinson can’t fulfill that kind of presence.

When I joined Twitter, I was delighted by the presence of authors, literary magazines, and book presses. It was like browsing through a virtual bookstore: I followed Margaret Atwood, Joyce Carol Oates, Michael Ondaatje, Salman Rushdie, Anne Lamott, Sherman Alexie, Roxane Gay…and that’s just the writers. Almost every university literary review is on Twitter, plus Tin House, Willow Springs, McSweeney’s, and The Paris Review. I followed The Penguin Press, Red Hen Press, Random House, and Graywolf Press. Authors, magazines, and presses are tweeting like they aren’t worried about censoring themselves or fulfilling an image of distant formality. They talk; their followers talk back.

Every time the little blue mark pops up on the bottom of my Twitter feed, it means I have connected with someone. One time, that blue mark appeared because Margaret Atwood had retweeted my tweet. It was incredible – an accomplished, famous writer who has over 300,000 Twitter followers took the time to retweet my tweet. I took a screenshot of my tweet on her profile, uploaded it to Instagram, and updated my Facebook status (it read: One of my tweets was retweeted by Margaret Atwood, one of my favorite authors. No big deal…just kidding, it is!). In my 15 minutes of Twitter fame (at least, it felt like fame to be on Margaret Atwood’s profile for, literally, 15 minutes before I was lost in her sea of tweets) I experienced how literary culture powered by social media makes writers and literary organizations accessible.

One of my projects this semester was to add to our SR Goodreads bookshelves all of the books by SR Contributors from all of our nine issues. I created bookshelves that hold fiction, nonfiction, and poetry written by Superstition Review contributors. With nine issues of Superstition Review released to date, the number of books quickly rose to well over 1,000. I became better acquainted with so many contemporary authors.

Some Superstition Review contributors have a vast list of published works, such as Sherman Alexie, T.C. Boyle, Adrian C. Louis, and Madison Smartt Bell. Other contributors have a smaller list of works on Goodreads, but their readership is growing as they use Goodreads and other social networking sites to create an online presence. The SR Goodreads account is a great way to follow their careers.

As I worked on a Goodreads project for Superstition Review, I noticed that literary magazines and presses are also using Goodreads, like other social networking sites, to extend their online presence. Goodreads’ target audience is passionate readers, so the site can be used to showcase works that magazines and presses have published while making connections with readers and other literary organizations.

Willow Springs and Featherproof Books have bookshelves titled “we published it,” The Paris Review has their blog connected to their Goodreads account, and Superstition Review includes all of their various social networking links on their Goodreads profile. The Goodreads literary community shares the goal of extending readership of their magazine, blog, and the authors they have published, while increasing traffic to their other social networking sites.

With the emergence of Goodreads, the options for following and connecting with authors, literary magazines, and presses is vast. Facebook, Twitter, Blogs, and Goodreads are all channels of communication within the literary community: which do you prefer and how do you use them?

You can visit our social networks here: 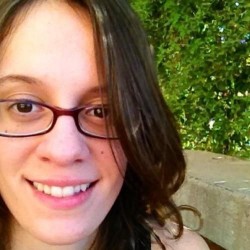 Rikki Lux
Rikki Lux is a junior at Arizona State University. She will graduate in 2014 with a degree in English Literature and a minor in Communications. She plans on exploring MFA programs or entering into editing and publishing, social networking, or communications fields upon graduation. This is her first semester with Superstition Review.