My identity is as a visual artist who is connected to the natural world. I have mostly maintained that connection through my urban yard. A real naturalist would live close to nature, or at least go there regularly. I usually go to my studio. And my work plays with combinations of what I see as real and fake. Such as the drawing Baboon-Baboon, based on a photograph a friend took for me when we were at the zoo, and an object I own. The zoo animals are still wild, but in captivity, which is a situation where something natural is not completely natural.

My yard attracts about as much wildlife as central Phoenix yard can, with the largest mammals being the endless feral cats. Some are strays, but some are true ferals, having reverted back to a wild state. Apparently cats are only 10% domesticated, so it is not difficult for them to make the transition. Last summer when a female and 3 kittens showed up in the yard I decided I was up for another taming project. This is the 4th time I have trapped and tamed a wild cat. Kittens are much easier, though the first cat I tamed was an adult. I had my eye on a pure white kitten who peered at me through the window a few times.

And by luck, he is the one who ended up in my trap. He was one of the wildest cats I have ever trapped even though he was still a kitten. So I named him Feisty, put him in a crate, and moved him into my studio. Having a wild cat in my studio mimics some of what happens in my work, but the cat is real. And it is again a case of nature that is no longer in a completely natural state. Feisty was an extra big challenge in the beginning because he kept hurting himself trying to get out of the crate. Usually cats give in to being in a cage after a day or so, but not Feisty. The cage speeds up the taming, the smaller the space, the faster they tame. The first step in taming is to get the cat to eat while you are in the room. Their motivation to eat is the only reason they can be tamed. I also wrapped a stick in a rag and started reaching it into the cage and petting Feisty with it.

Everything I did was with my protection in mind. He showed aggression many times. He charged the cage when I walked by, attacked the rag stick with his teeth, spit, swiped, and hissed regularly. After 6 days I was able to reach into the cage with a bare hand to pet him at times. But he was still hurting himself, so I released him into the studio early. After a couple days of letting him hide, I blocked all his hiding places, and started over with the taming. It took a couple weeks to get him as tame as he was in the crate. And it took about a month to get him completely tame to me. It is an amazing transformation to go through with an animal. They hate you in the beginning and love you completely in the end. Their love feels like an extra special gift.

The next step was to get him tame to other people. And I needed help from friends and my husband for this. I bought some extra yummy treats that he only received from people other than myself. And lots of people came out to my studio to help with his taming and to give him treats. This eventually worked after really generous help from my friend Monica and her husband.

For the next step my husband and I screened in the porch between the house and the studio to use it as a space to introduce Feisty to our 3 indoor cats. First you allow the cats to smell and hear each other before seeing each other. We also have a security door that allows seeing each other, but not getting at each other. And this is the where we are now. Eventually Feisty will be moved into our house to become our 4th cat. The introduction process can take a couple days, or a couple of months, depending on the cats involved.

It has been 6 months since I trapped Feisty, and he demands quite a lot of attention while I work. I have chronicled his taming on Facebook, and people I see who would normally ask me about my art, are more likely to ask, “How is Feisty?” All cats carry a sense of the wild with them, but for me I think back to what he was like when he was wild, and think about that difference. Here I have taken a wild animal, have gotten to know him intimately, and have turned him into a loving and affectionate creature. What is the place of animals in our world? There are lots of answers and opinions on that. At some point the truly wild animals and places will be nearly gone, and we will need to decide as a whole whether we are going to let them go. This is one of the big questions of my work as an artist. Feisty is a great example of what wild was.

And as an artist I need to have interesting life experiences that I can take into the studio. But in this case, a little white cat is already waiting for me every day. 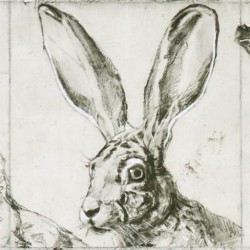 Carolyn Lavender
Carolyn Lavender was raised in Kent, Washington, but lives/works in Phoenix Arizona.She obtained her MFA in Drawing in 1992, from Arizona State University, and has been actively making work and showing since that time.Carolyn and her husband live on a densely planted urban lot that attracts a lot of bird life, insects, lizards, geckos, and feral cats.She is connected to nature, but lives within the framework of city life.

4 thoughts on “Guest Post, Carolyn Lavender: One Less Wild One”