In the photo, Jeff and I are busy fighting the bad guys, even if I don’t quite know who they are.  This is 1989 or so, in my backyard on Breconshire Drive. It’s fall (note the naked trees in the background), and while the photo appears to depict me as a little grown-up (complete with backpack flung confidently over my shoulder), one oft-overlooked detail in the photo immediately returns me to child form.

It’s the shoes—me trapped in my Velcro, while Jeff’s in laces. This, of course, was humiliating for me, and while I quickly rectified the problem by practicing bunny ears on every pair of shoes in the house, this picture forever served as proof of the difference between us: he who could double-knot while I couldn’t manage a single; he who could catch the bad guys while I didn’t know what a bad guy was.

The outtakes from “Breconshire Drive” are far longer than the essay itself. For instance, the final draft makes no mention of our days spent gathering crawdads in empty bread bags down by the creek. Nor does it detail the rash of burglaries that overtook our neighborhood one summer, how our golf-club-wielding fathers were not all-powerful after all. Instead, what remains is an essay on a friendship boiled back to basics, a single memory serving as the touchstone for other memories that might emerge. On its own, my nostalgia-induced work on a walk shared between friends hardly deserves the space it was graciously given. But it’s my hope that my essay on “a walk shared between friends” is actually an essay about a walk shared between friends who are soon to realize the troubling truth of mortality—that even at the age of 7, our walks were coming to a close, that my strides were too short to meet Jeff in his new home in Michigan.

Let me be clear: I don’t expect readers to feel sorry for the 7-year-old version of me. After all, losing a best friend is what being 7 is all about. Jeff and I had watched enough crawdads die in our bread bags to know that even people with good intentions sometimes hurt things that didn’t deserve it.

Sure, I was devastated, but mostly because the world seemed suddenly disinterested in adjusting its plans on my behalf. I could slam my bedroom door as much as I wanted, but it wouldn’t keep Jeff’s family’s U-Haul from backing into his drive. And even after he left, I learned that I couldn’t ride my bike back and forth along his stretch of sidewalk long enough to remove the “Sold” sign from his front yard. In short, I was shocked less about Jeff’s leaving than the world’s failure to retract its cruel fate. I was 7, and while I felt I’d previously proven myself as an all-powerful being (after all, no one else in my school had won back-to-back blue ribbons in the plant show), the world seemed just as unimpressed by my powers as it had our golf club wielding fathers’.

Kill my umbrella tree, I begged to a God I’d never met. Just promise me you’ll blow up Michigan, too.

Years later, Michigan remains intact, my water can gathers dust, and the most tangible piece of our friendship that remains is the photograph described above, the one of me looking dumb in my Velcro shoes. Though perhaps the worst part isn’t the Velcro, but that I—the Velcro-shoed boy—seemed certain that eventually we’d get those bad guys, even if the bad guys weren’t guys at all, but a place beyond Breconshire Drive.

You can read the essay “Breconshire Drive” in Issue 10 of SR. 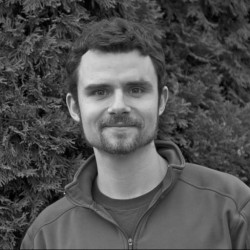