The new form of “Twitter fiction” goes by many different names – novels, stories, flash fictions, micro fictions – but in reality, stories constrained to under 140 characters are unique. Part of the reason there are so many names for these stories is that we’re all still trying to figure out this new form. Already, there are quite a few literary journals that have started to specialize in Twitter fictions, most publishing onto Twitter itself, a few with their own sites. Even so, as writers and readers both, there are some key characteristics unique to the Twitter fiction.

Though I will continue to use the phrase “Twitter fiction” to describe these stories, and up until recently i had called them “micro fictions,” I like thinking of them as Tweeted novels. It’s a distinction that helps to remind us that, regardless of length, these are still complete stories. That’s what makes them difficult, and a real art to write well. Like poetry, Twitter stories are fairly quick to draft, but can take some significant effort to revise. Not only do we have a very specific – and tight – word limit, we still have to cram plot, character, and turn, beginning, middle, and end, into 140 characters. When I’m writing or reading Twitter fictions, I still aim for or want to see an arc, a change, a turn in the story, just as if I was reading a longer work.

This point is key: just because they’re short, Twitter fictions still must have all the features of a short story or novel. How is that possible when you only have a fraction of the space? Ironically, since I advise the opposite for students of longer fiction, in 140 characters you don’t have enough space to achieve any real kind of scene or action. Unless absolutely necessary, avoid dialogue. The quotation marks and dialogue tags are a waste of characters. Instead of scene and action, aim for emotion that will resonate with your reader, and let your character’s change be the climax or arc of the story. As with longer work, do not aim for a twist, a trick, or a pun. No “and then I woke up.” Such tricks are deceptive and not grounded in character. Aim for emotion instead.

Your reader has to feel more than you ever say and be allowed to imagine the scene in which the story takes place. The setting of these stories only has space to be implied. This is a different kind of showing, where you show a vast amount by the little you do tell. To use a common metaphor, Twitter fictions are icebergs, where the full novel takes place beneath the surface, hinted at and shown to exist only by the little that’s seen. This effect is exactly what Hemingway achieved so well and famously in his 6-word micro-fiction: “For sale: baby shoes, never worn.” This story never describes its characters, and yet we know these parents and the conflict of their loss, we see them taking this step past grieving to put their lost infant’s collected but unused belongings up for sale. There’s pain, there’s growth, there’s a decision: character, plot, arc, climax.

This is a Twitter fiction of mine called “Care Package” (published December 13, 2011 on OneFortyFiction.com): “When donated Christmas boxes came, she gave all the little gifts in hers to the younger orphans. All except the doll. She’d never had one.”

First, setting: we know it’s Christmas time, we know this is an orphanage, possibly in a developing country. None of this is described as setting.

Second, character: because of the comparative word “younger,” we know that she is an orphan, who has been at this orphanage for a while. In this role, we see her behaving in a maternal way to the younger orphans, taking on the giving role of her own benefactor to the others.

This bring us to, third, plot: the action shows her giving away her gifts, caring in the same way for her sisters and brothers. But she makes a decision to withhold one item from her package, a doll, which gives us a plot turn, a decision. But there’s one more element here, emotional resonance: the character turn. The fact that she has never had a doll before spins us back to the characterization of her limited childhood, and the meaning of her doll, clung to, shows us that despite the maturity of her actions, she still longs for a childhood she never had.

A few tips for revision and hitting that 140 character mark. Don’t name your characters without specific purpose: “he” and “she” are shorter. Or chose a name like Al, Rob, Mac, etc. Further, if you use a first-person narrator, “I” is even shorter! Be flexible with gender when reasonable; male words – he, man, boy, son – tend to be shorter in English than female: she, woman, girl, daughter. Within reason, punctuation can be flexible: that comma that you cringe to leave out in typical prose can often be implied. Use contractions. Use long sentences so you don’t have to spend characters and words setting up a new noun-verb system. (You’ll get 1-3, maybe 4, sentences; 20-30 words.) Begin the story with a clause – “When …” – this will help you kick-start the piece faster.

There are many venues now when you’re looking to publish your Twitter fictions. Review their guidelines before you finalize your revision: some of them require you to Tweet your Twitter handle (@____) along with the piece, so if your handle takes 12 characters, you’re down to 128 for the story.

The true art of a literary Twitter fiction is in the depth that you achieve beneath the 140 characters. If you get the characters and their emotions right with the words you do write, the rest that you don’t write your reader will be able to feel.

To enter the Superstition Review Twitter Fiction contest, tweet a “novel” to @SuperstitionRev by Nov 11. Winners will appear in our newsletter. 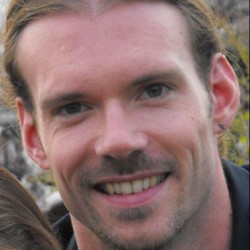 Matthew Brennan
A past contributor to Superstition Review, Matthew Brennan is a writer and editor based in the Pacific Northwest. He earned his MFA in fiction from Arizona State University and serves on the editorial staff of the Hayden’s Ferry Review and Speech Bubble Magazine. More than fifty of his Twitter fictions, flash fictions, short stories, and translations have appeared in literary journals, including Two Lines, The Los Angeles Review, Per Contra, Emerge Literary Magazine, Pure Slush, The Citron Review, and Fiddleblack. You can learn more about his work here: http://matthewbrennan.net