[________] depends on a person’s ability to sell, the act of portraying great injury for an audience.

[________] is always made for an audience, but while the violence is staged through a series of deliberate moves to advance the audience through the story, the violence is also very real.

When [________] is at its best, it draws something primordial from inside you—a daggered kiss, a fist to your left ventricle, all those things you’ve always wanted to feel but never knew it.

When you make the decision to forge a living at [________], your friends and family will likely try to convince you to do something else.

[________] is at once graceful and brutal. You will brace for war when it begins. You will yearn for beautiful things when it is over.

Pay attention: so many things you thought impossible—giants and angels, human-beast hybrids howling under the lights, the image of blood blossoming beautiful down a man’s face—everything becomes possible through [________].

[________] is infused with the language and mythologies of the different places it is practiced. Everything is a symbol. Nothing is really a symbol.

Often, [________] is difficult for some people to understand. That’s because they still think that everything has to mean something.

Some practitioners of [________] make a living by being beautiful, while others thrive on exposing the ugliest sides of themselves. [________] itself is always beautiful.

Violence sometimes surges more inside the body than outside. Violence in [________] is always real, if you know how to look for it.

[________] often resembles those conflicts you see in everyday life. Some call this mimesis. Some acknowledge that it’s a bloodbath.

[________] is an exploration of the human heart, a drama about what it means to be alive in the world. It zig-zags and leads you in contradictory directions. In the end, good is supposed to win, but then we are reminded of how often evil comes out on top.

Sometimes, a celebrity will get involved with [________]. While their work attracts mainstream attention to the art form, it’s often not good, more of an embarrassment than a contribution to the field of [________].

Only a few practitioners of [________] become rich or famous from their work. Most toil their whole careers in relative obscurity.

Too many people on the internet think they know more about [________] than they really do.

The history of [________] is filled with notorious characters and legendary personae. You can’t help but imitate them, even though you know better than to try any of that stuff at home.

Successful [________] encourages the audience to suspend disbelief, to embrace furious language like it’s a war cry, like it’s a prayer, like it’s going to kick everyone’s ass if the world doesn’t shut up and listen. 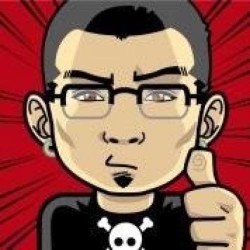 Todd Kaneko
W. Todd Kaneko is the author of the Dead Wrestler Elegies (Curbside Splendor, 2014). His prose and poems have appeared in Bellingham Review, Los Angeles Review, Barrelhouse, the Normal School, The Collagist and many other places. He has received fellowships from Kundiman and the Kenyon Review Writer's Workshop. He lives in Grand Rapids, Michigan where he teaches at Grand Valley State University.