I’m not the first poet to write memoir, but I’m probably the worst. I loved it anyway. There’s no hiking involved, and no drinking in the whole world with a sip. And it saves a lot of time by living each page rather than doing any research.

In poetry, my cat-like imagination tends to run into other rooms for no reason so it was nice not to worry about invention. And while a novel might require heart to write, all I needed for memoir was a walnut desk, and a small bronze sculpture of a nude man to hold the paper down on breezy days.

It took surprisingly long to write and re-write a ten month snap of my Tuberculosis. Like: 45 minute conversation about a 25 minute version of a 5 minute Phish song.

I went to the mirror to look at myself. I’d aged since beginning it. In writing almost exclusively about my body in 2013, I had neglected small details about my current portrait. I no longer resembled the bronzed man sitting so pensively on my desk. Was it true that you could sand blast wrinkles away? My soccer ball didn’t reply.

My publisher had asked for a book of poems. “Beautiful memoir,” he wrote, “But it’s so inscrutable. The problem is that there’s no plot. The narrative of your life is not the same thing as plot. What about a few scenes outside of the hospital? Maybe a train or two?”

I joined a vibration society. The salon had sixteen tables and each one vibrated a different part of your body. It was a caper to crank the timer and start the vibration before settling in, but I eventually grew fond of the slight nausea. Early afternoons were excellent for vertigo, before the after-work crowd came to jiggle. Still, it was nothing like an actual train. Last month, one had derailed about two hours away, in Columbia.

My memoir was full of seductive ache and longing, and horrible mortality, and impossible love, but without any plot—without any hiking into some dark wood—it was just a bar story. The set-up was the climax, which might be OK if I were Li Po drinking the moon.

The nearest passenger train depot was 25 miles outside town. The train passed at one in the morning. In spite of my florid disguise, I was spotted by a fiction writer as I boarded the regional train bound for Norfolk. “Barrett,” Mr. Yoon said. “This train is only for short story writers.”

“How short is short?” I asked, offering him a taste of my subject-verb-direct object sandwich with its plain spoken tomato.

The easy part about poetry is that you don’t have to show character motivation, a definite downer as far as writing prose. You just put a man on a train. He has two packages and he’s wearing eye glasses which he doesn’t really need. You don’t even have to say whether he’s stopping in Norfolk or changing trains to Richmond.

I blushed up each step to the garret studio off Broad Street. “I was sure you had died,” the artist said. I offered him the packages and accepted a drink. I walked around the studio blinking at the works in progress and taking my clothes off as if I were going to change into something else, but I didn’t change into anything. He reached for a stick of charcoal and rattled out a few coughs. I turned. I shifted my arms. I looked past him into wilderness. 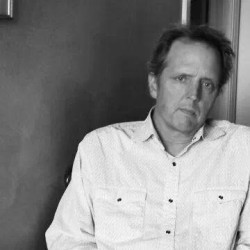 Barrett Warner
Barrett Warner is the author of two poetry collections, Why Is It So Hard to Kill You? (Somondoco, 2016) and My Friend Ken Harvey (Publishing Genius, 2014). His recent work appears in Real Pants, Beloit Poetry Journal, The Adroit, Entropy, and Reality Beach. Last year, he received a Maryland Individual Artist Award for his nonfiction, and he was awarded the 2015 Tucson Book Festival essay prize for a chapter of his TB memoir, My Thousand Year Old Disease. In May, he made his stage debut as the alcoholic burglar Selsdon Mowbray in a regional revival of Noises Off.