In 2009 I finished my first memoir. I’d worked on it for a few years, performing copious amounts of research on international garden design, horticulture, psychology, landscape theory, as well as interviewing a few family members. Well, I actually only interviewed my mom, and that was a two hour heart-wrenching session where for the first time in my life I got to know her as a person more terrifyingly real than I ever imagined.

During a visit home I was anxious. I didn’t want to broach the interview we both knew I wanted to do (and that would be the key to my memoir), but as the visit was ending she finally asked when I was going to get around to it. She often asked this of me as kid when I had the stomach flu – I held in my vomit until the very last minute, resulting in a big mess nowhere near the bathroom. Sorry. Too much info. I am a memoirist you know.

I felt awkward during our interview. I shook. I felt sweaty and cold. It was strange. I wasn’t ready for this kind of memoir – the one where you speak the deep truth by having confronted it in your lived life. A few weeks later my mom emailed me the deeper, deeper truth, saying she’d never speak it in person to me. It was the story of her siblings being beaten and molested, of her stepfather spiking her vanilla malt and trying, unsuccessfully, to molest her, too. I learned that for my family the garden was an escape, a place to center and come to grips with life.

I edited that memoir, Morning Glory, in 2010 because I knew it lacked structure, and a big part of the reason it lacked structure was because I was afraid to dig as far I needed to. It still lacks structure, and has sat idly in an external hard drive ever since. But my new memoir, which I began working on in 2009, is risking more. It’s bolder. It’s asking big questions. It’s taking a stand. All because I’m putting more of myself on the page.

I’ve taken four trips to Oklahoma to interview family and experts about state history, about homesteading stories from 1894 to the 1940s, about prairie ecology, about Mennonites and Cheyenne beliefs. Exploring my love / hate relationship with my birth state has helped me find the pain that Oklahoma represents for many cultures, human and plant and animal. As an accelerated microcosm of manifest destiny, my family helped destroy the prairie — I want to right that wrong I’ve felt in my bones longer than I’ve known how to name it.

But I’m terribly afraid that in saying the above, I’ll alienate the older members of my family who see the Plains in rose colored glasses, or that I’ll be accused of not honoring the sacrifice of my immigrant family who spoke only German. But the more I read, the more I travel, the more I remember my childhood in the hot, red dirt, I know what my truth is and that I have to speak it loudly – so loudly it hurts people’s ears and hearts. If I can’t risk my life here, on the page, alone in my office, how can I ever risk it out there? How can I live with myself if my inner and outer selves don’t merge? These questions have become my second memoir’s structure. Through a failed first book and much more active research than I ever did in nine years of grad school combined, I’ve come to gain confidence and faith in my writing and my life. At 37, it’s taken me many failures to write boldly, to write and trust my truth – and if Turkey Red is ever read by family, I will surely fail again. But I will have profoundly succeeded, too. 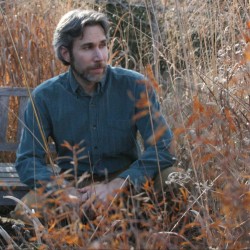 Benjamin Vogt
Benjamin Vogt has a Ph.D. from the University of Nebraska-Lincoln and an M.F.A. from The Ohio State University. He’s received a fellowship from the Vermont Studio Center and nominations in two genres for a Pushcart Prize. Work has recently appeared in Crab Orchard Review, Diagram, ISLE, Orion, The Sun , andVerse Daily. Benjamin is the author of the forthcoming poetry collectionAfterimage (SFA Press). He blogs at The Deep Middle, where he rants about writing and his 2,000 foot native Nebraska prairie garden.

One thought on “Guest Post, Benjamin Vogt: Writing About Family Boldly and With Personal Truth Guiding the Way”