Here in Pittsburgh where I’ve lived for 30 years this autumn, the maples are burning up again, in their yearly process of leafloss. Abscission is the scientific word. There was a week or two of brilliant October yellow, orange, and red canopies. Then the other day, walking the dog, I looked up and realized their brilliance was about half gone, those glorious balloons of color were now ragged cups filled with bare branches and bright blue sky. It was startling, as it often is, those half-forms. Underneath our feet were the old leaves, their colors turned brown, gray, muddied.

Occasionally now there’s the messy bundle of a squirrel nest visible, a construction I keep swearing I’m going to investigate as an architecture but never have. Squirrel nests never seem like they’re made of anything that would survive in a strong wind, and yet they do. They look like a handful of leaves caught in some branches, things formed accidentally, lost things caught up in the random tantrums of wind, part-leaf, part-plastic strips, debris, detritus.

Officially, they’re called dreys, and the architecture is sciurine (pronounced sahy-yoo-rahyn), the term for things having to do with squirrels and their relatives. And their architecture is surprisingly resilient, made up of twigs, damp leaves, and compressed moss, then built up from there, supported with more twigs and leaves. Inside, they’re lined with soft material—stripped bark, moss, fur, even cotton batting. They’re waterproof.

When I was a child, I used to dream of an underground burrow where I might escape, sleep, read my books. I read about underground houses, homes carved into mountains. They seemed secure, quiet, safe. Maybe I read too many stories about small animals, who escape predators by diving into the earth. Mr. Badger, Mr. Fox. Earth is protective for small lives.

Although I loved climbing trees as a kid, I never dreamed about living in one, in a squirrel nest, sleeping in a kind of hammock, wrapped in fur, surrounded by moss, protected by leaves, rocked by the wind. I wouldn’t have trusted that kind of architecture as a kid; I wanted safety. But these days, as November begins to happen around me, orangeing and yellowing and browning all that was green around me, it’s clear how many lives depend on and flourish in such architecture.

All this makes me wonder about the kinds of architecture my poems have depended on, whether my sonnets—the form I feel most drawn to—are some echo of the cave-houses I craved as a child. Are the structural requirements of those 14 lines like a mountain pressing down upon the voice that must carve out a space for itself in which it can speak? Maybe that’s what I mean when I sometimes talk about the poems I love as producing a feeling “like being underwater.” I feel both contained and in danger in them.

What would a sciurine theory of poetic form produce? My immediate thought is of Ted Berrigan’s sonnets. There seems to be a lot of faith in those poems, faith that they will make sense or that the reader will find something meaningful in them. I almost said air instead of faith in the sentence above. The older I’ve gotten, the more appealing those poems have become to me as a writer, full of gusts and surprises. So maybe it’s not the form but the syntax, or maybe I mean a set of supports I surround my voice with. Meaning. Image. Metaphor. Coherence. Seriousness. You can probably imagine your own set of preferred elements.

It is an interesting time in American letters. So many things seem possible that we’re impossible earlier. Or maybe I mean unthinkable. Hybrids. Mash-ups. Mutations. Strange bedfellows. Maybe they’re not so strange; they’ve just gone unnoticed all this time.

What other forms have I been staring at all my life and not noticing? 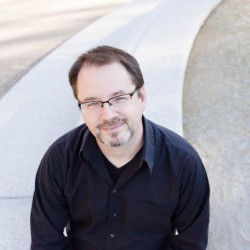 Jeffrey Oaks
Jeff Oaks' newest chapbook, Mistakes with Strangers, was published by Seven Kitchens Press in 2014. He has published poems in a number of literary magazines, most recently in Assaracus, Barrow Street, Field, North American Review, and Tupelo Quarterly. His essays have appeared in At Length, Kenyon Review Online, and Creative Nonfiction, and in the anthology My Diva: 65 Gay Men on the Women Who Inspire Them. He teaches writing at the University of Pittsburgh.