We read Where The Red Fern Grows aloud in Mrs. Howard’s seventh grade English class. It was the kind of droning, affectless reading young teens are best at. For two weeks, a student would stumble through the required pages until relieved by the next student in the row. With no thought given to punctuation, stress, or intensity, we lumbered through Billy Coleman’s time with his hounds Old Dan and Little Ann. Mrs. Howard was patient the whole time, correcting the big words and rephrasing dialogue to indicate the appropriate colloquial delivery.

This isn’t coming from a student who was bookish and shuttered at the butchering of literature. I hadn’t really discovered books. That would come years later. At the time, I was into skateboarding and my chain wallet that made a racket against the plastic chair of my desk. I didn’t have any money, but I did have a wallet that was connected to a belt loop of my oversized jeans by a choker chain. This is all to say that my priorities were elsewhere, and I too struggled with reading aloud.

Also, this was seventh grade. Even if I could have read with excellence and clarity, I didn’t want to give the impression that I was ‘trying.’ Trying meant you thought you were smart, and smart was vulnerable. It’s embarrassing that I ever thought this way, but there it is. Anonymity was more important than elocution.

Despite our terrible delivery, the story still got through. I remember being secretly terrified when Old Dan and Little Ann protected Billy from the mountain lion. They didn’t stand a chance. Billy eventually killed the mountain lion with an axe, but Old Dan’s wounds were fatal.

Out of nowhere, Mrs. Howard took over the reading after Old Dan died. She said she had read these scenes to her class every year, and every year she cried. It was some kind of odd tradition. At most, I thought she might get a little misty; maybe a couple movie-style tears down her cheek. I had no idea.

The tears started when Little Ann slept next to Old Dan’s dead body, not knowing what else to do. Mrs. Howard held the book with one hand and wiped her nose and eyes with a tissue. She eventually just held the tissue to her eyes as she read. Her voice broke during Dan’s burial and Ann’s loss of appetite, and she wept when Billy found Ann dead on top of Dan’s grave. It was as though these were her dogs, and she was going through the loss for the first time. But, it didn’t make sense. She had done this for years and knew exactly what was going to happen. Also, it was a book, and none of it ever happened.

Mrs. Howard smiled at us when she finished; her face was red and she was still wiping her nose. No one laughed and no one clapped. We were a bunch of mean kids that didn’t understand that kind of vulnerability. Plus, it had come so fast and hard. The adult was crying and crying big. It just didn’t compute. She gathered herself just as the bell rang. We finished the book the next day, and no one ever asked her about the crying.

This was not the moment when I decided I would be a writer. Nor, is it the moment when I understood the importance of fiction. In fact, nothing occurred to me while Mrs. Howard read and cried. It went under that awful category teens have for anything unexpected: that was weird.

Decades later I was watching the television with my wife, and a clip from the 1974 version of Where The Red Fern Grows triggered the memory. I started the story casually, but I burst into tears when I got to the part where Mrs. Howard cried. I just couldn’t finish the story without crying. I could finally see that day as an adult, from the front of the class, and the sheer bravery of the act was overwhelming. I could appreciate Mrs. Howard opening up to her class year after year only to be looked at in horror by a bunch of bowl-cutted, acned teens. She showed us that it was okay to be moved by something. In fact, she showed it was vital to find that which moves us. It was a protest against our incredible apathy. It was a hope for decency. Tragically, it was the kind of gift that only makes sense years later. She had to have known her crying would initially be lost on us, put away and not dealt with until years later, not until we had been truly vulnerable in front of someone else. Like I said, right after it happened I just closed my book and went to lunch. Mrs. Howard might have watched our faces to see if anything registered, but that part I don’t remember. And I wasn’t there years after, but I am fairly sure Mrs. Howard stood in front of the classroom each year and cried for her students every time Old Dan died. 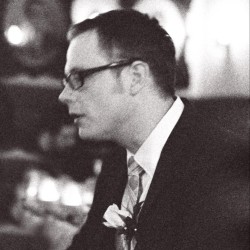 Joe Neal
Joe Neal has fiction forthcoming in Salamander. He is pursuing an MFA in fiction at Cornell University and is working on a collection of short stories and a novel. He is originally from Franklin, Ohio.

2 thoughts on “Guest Post, Joe Neal: On Being Moved”