One particularly boring day in 9th grade Chemistry, I wrote a story about my group of friends defeating our evil teacher. I folded it in a note, and passed it along the back row, where the story’s heroes read it one by one, stifling laughter and sneaking glances at the blissfully unaware teacher. We had recently decided we were all superheroes– vigilantes, to be specific. Everyone got a nickname and a power, debated among the group. I still didn’t have a name or power, and I was too self-conscious to make up my own, so I asked a friend.

He screwed up his face, thinking. “What are your skills?”

“Well, you’re good at writing. You could be the journalist that follows the superheroes around!”

“So like, a secret superhero disguised as a journalist?”

“No,” the boy said, already shaking his head. “No, that wouldn’t make any sense. If you had powers, you’d be fighting the bad guys with us. You can’t have powers.”

“Not technically,” he said. “But without you, who would know about all the stuff we’re doing? You would give the townspeople hope! Someone has to do it.” I refused.

I’ve always wanted to be a fiction writer, too. The most common advice given to fiction writers is also the best: “Ass in chair.” Stay where you are; keep writing. Of course you need to live a life in order to write, and in order to be a healthy human being– an often underrated pursuit among artists, but a necessary one nevertheless. A good writer, though, should be perpetually conscious of the work, always ready to use their few solitary moments to sit down and dig into the deepest marrow oftheir soul. It doesn’t look romantic, sitting in a chair all day; it’s not a hunger strike or a sit-in or an exotic adventure.

But it certainly requires fortitude. In one of W.B. Yeats’s last poems, “The Circus Animals’ Desertion,” a writer near the end of his life ruminates on the stories that he used to write about, great tales of adventure and triumph, vain gaiety, vain battle, vain repose. But in his age, the writer realizes that what he has left are not the mythical creatures and characters, the circus animals, all on show. Rather, it is the unglamorous murk of human emotion that he must write from. He concludes the poem, saying

I must lie down where all the ladders start
In the foul rag and bone shop of the heart.

I asked a professor in college once: how do you dig into the darkest parts of yourself for writing, and also live a healthy life? He peered at me over his fingertips, with his uncanny pale blue eyes, and said, “I am always vigilant.”

To be a writer is to be vigilant. To be vigilant is to be watchful, awake. To keep a vigil is to stay awake in prayer. To be a vigilante is to be ‘a self-appointed doer of justice.’

These days, I want badly to be a self-appointed doer of justice. Villains are everywhere and multiplying, and a clamoring part of me wishes that I could abandon my work and my ordinary life and even my writing to go on some death-defying, valorous adventure– ideally somehow involving magic?– that would mold me into a true hero, capable of quickly and concretely changing the world. I want to single-handedly save lives. I want to do something noble and powerful, worthy of an incredible story. Of course, if my impulse for action is contingent on story, my underlying desire is probably more about the tale than the act.

I’m not talking about small acts of goodness: calling senators, writing letters, doing volunteer work in a community, being kind and attentive to the people in your life. All of those and more are humbler works that come from less glory-hungry urges, and that, if done consistently, don’t make up merely one adventurous plot arc to tell and retell. Rather, they make up a whole life of daily, mundane choices, like waking up every day, getting your ass in that chair, and putting pen to paper. The only thing I’ve wholeheartedly kept from my former Christianity is an immense respect for and love of prayer. A favorite author once called prayer an ‘act of love’ and I’ve felt that definition ring true more than any other. For me, writing and prayer are inextricably linked– both a deeply embedded part of my childhood, both a salvation, reconciliation, meditation. Both annoying, sometimes. Both easy to procrastinate on, both unglamorous, both private, both practices that everyone else seems to do with more ease, more beauty, more reward. Both practices that thrive in questions and not answers. Both vigils. Both staying awake.

And following them are the journalists, the storytellers, the poets. The people with more questions than answers, the people whose job it is to give the townspeople hope, or fear. The people sifting through what their leaders are doing to find the truth under it. The people who lie down where all the ladders start.

This world needs heroes. It needs writers, too. 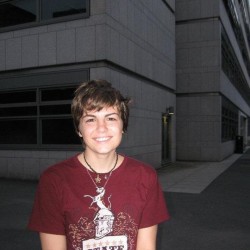 Kerry Cullen
Kerry Cullen is a literary agent's assistant at Curtis Brown, Ltd. Her work has been published or is forthcoming in The Rumpus, Luna Luna, and Fiction Southeast. She earned her MFA at Columbia University, and she lives in New York.