Sacrifice of Love: The Poetry of Daniel DeLeon

This is what I know. I know a young man—an old student of mine. He loved his poetry. He went off to college and continued to love his poetry. Spoken Word was his thing. The performance of singing a poem, of spitting a poem, spoke to him as both prayer and survival. He graduated college and came back to the school where I am still employed. He is now my colleague. We work in the same department teaching poetry and literature to young people. His name is Daniel DeLeon and he is a force. He told me a few months back that he wants to be the mayor of Boston. A Spoken Word artist as the mayor of Boston. I said, “You should be the president of the world.” God knows we need one now more than ever and why not a poet.

When I said this, he laughed. We were sitting in the classroom as colleagues. 7  years earlier we were in the same classroom. He was writing poems as a 17 year old, writing and reading with such focus and purpose that he blew away anything and everything in his path. Till this day I remember a poem he wrote about the toilet in his grandmother’s house in Guatemala. “You have to move a stone slab in order to take a leak,” he told the class. Danny did not care about the scatological nature of his piece. He was proud of his story. A proud young man is hard not to notice. Daniel, on his quest into the adult world, has not lost his pride. It has gotten brighter. It shines even when he is in pain. I thought about that when we were sitting together in our classroom talking about his poetry and his political aspirations. “It’s just about community,” he told me, “and giving back.” I wondered, “Which?” “Both,” he informed me, “both.”

I have thought a lot about the existence of poetry in the world, in the history of the world, as a glue, or, the potential it has to bring folks together. It used to serve this purpose, think Homer, folks in communal joy under the night sky, the hungry flames shooting up into the dance of Cassiopeia and Andromeda. In the pubs and social halls of Limerick. Story-time at the local library. But, the poetry of America if not, for the most part, performed as Performance Poetry, does not bring people together. Poetry is not about community. Ben Lerner knows this. Jorie Graham knows this. If you go to any AWP, AWP knows this. At any one of these conferences there are 2 very divergent waves coming at each other from different parts of the big ballroom where the book fair hails. There is the wave of ‘we are all in this together’ and then there is the other wave of ‘what nut can I get today?’ It’s sad and scary because it obliterates community. More specifically, it obliterates the community that does not come to AWP–the community of the neighborhood, of the schoolyard, of the rest of the world in its turmoil and beauty. Daniel DeLeon, though in his own BMW of desire, has intentions to allow poetry to be a foundation for bringing people together. At Boston College he created a Spoken Word club that grew from 10 to 200 and gave hours and hours of pleasure and joy to hundreds more. I have seen Mr. DeLeon perform his work. It’s intoxicating both as performance and on the page. It’s a poetry that lives in the present, ruminates on his experience growing up in difficult circumstances, and yet, at the same time, resonates with a population of people in this country who have tasted privilege. It is a poetry, which speaks to everyone because it is a prayer for the living, for all people-kind.

I remember my first prayer,

until it was my turn to talk to God

with a white beard,

but too young to understand why God, doesn’t talk back.

I couldn’t understand why we were rich in spirit, but couldn’t afford milk for my morning bowl of cereal.

told God to buy mommy a house with an ATM machine in the living room so that she would never have to scrounge up change to buy a loaf a bread, ever again.

I told him, if that’s too much,

then maybe he could help me behave

so that daddy would stop putting his hands on me.

and that I was a poor naïve boy worshiping a white man’s image of God.

Have  you ever seen a peasant bow before a king?

Have you ever seen a slave kneel unto his master?

I haven’t, but I’ve see loyal servants bend into submission

at the altar; praising their almighty God.

Palms pressed against the sky begging to receive answers to their prayers and petitions.

Placing unrequited hopes in a being they can’t see, let alone begin to understand

yet they stand, firmly in beliefs

Waiting and waiting, for something I know nothing of,

something they call salvation,

and I’m still waiting to be rescued

whom I was told cold wash away my sin

I searched and couldn’t find you.

I called you by name and you wouldn’t respond;

I started crying and you weren’t there to wipe my tears;

I had nothing but a pillow to hug and an emptiness inside me,

a void I wanted to fill,

hunger I wanted to satisfy,

until I heard a poem that said,

Be hungry, it wont kill you.”

And for I second I thought I heard God in poetry,

only to realize God is poetry because poetry is an enormous love for humanity.

Haven’t you heard of the sacrificial poet?

The ultimate sacrifice, forfeiting fear, and subjecting themselves to scrutiny, yet still

forgiving those who don’t understand this love.

This brave soul crucifies their craft to this stage

puts their expression on display

only to facilitate the salvation and validation of others

For these saviors you don’t have to wait 3 days

just 3 minutes and 3 scorecards that’ll show you everything

you need to know.

See sometimes, when I spit my poems

I close my eyes and picture myself on a pulpit

and imagine that this is my prayer for you.

And even though I no longer praise my mother’s God

I’ve watched myself become a loyal servant, too.

A slave to this pen

pushing it across pages,

to remind me that just because God doesn’t answer prayers

it doesn’t mean we should lose hope in poetry.

If rapture is the essential driving force behind poetry, some way to use language in form, shape, color, tone and texture to get to a daily ecstatic harmonic temperament, then DeLeon’s poetry is working toward that, not only in content but in exercise. It’s prayer for him, an ongoing conversation between himself and that other thing beyond. If rapture is the thing we lose when we move out of our youthful playfulness and endearment, then rapture is the thing we try and regain, move closer to, with our poetry. Danny writes, “See sometimes, when I spit my poems/I close my eyes and picture myself on a pulpit/And imagine that this is my prayer for you.” Preacher. Teacher. Mayor. President. Poet. His work comes out of a direct service of illuminating some kind of divine community that is, at the core, this human reverence which is love. His poetry is not only word but it is also act. It strives to be body, to take place in the body, to meet the bodies it meets, as body. Part of this comes from the performance element to his verse. It is written to be listened to, to be heard and seen. His writing is both astonishing and astonishment. It is the other side of ‘being cheap.’ His poetry is generosity and gift, for everyone. DeLeon is not interested in contempt, he is interested in the soul to soul, the face to face, the love to love, that comes from spitting a poem in the hottest night, in the greasiest garage, under the fullest moon. What DeLeon knows is that poetry is love. And, if it is love, it has to be God. Any good poem, in the realm of the unsayable, to be said, is doing that divine work to be love. To be act. And you can’t mess with that no matter the landscape of this country, the landscape of the heart and its big boom into the world. 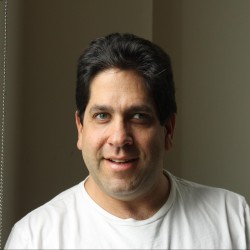 Follow Me
Matthew Lippman
Matthew Lippman is the author of three poetry collections: American Chew, winner of The Burnside Review Book Prize (Burnside Review Book Press, 2013), Monkey Bars (Typecast Publishing, 2010), and The New Year of Yellow, winner of the Kathryn A. Morton Poetry Prize (Sarabande Books, 2007). He is the recipient of the 2014 Georgetown Review Magazine Prize and The Jerome J. Shestack Poetry Prize from The American Poetry Review.

Follow Me
Latest posts by Matthew Lippman (see all)