Let me begin at the end like every apocalyptic film. The sun like a pregnant belly swells. We are old (or not.) We are sick (or not.) There is war enough to make us mad, even with nothing on earth to gain. We leave a book half-finished, a bill unpaid. Whether you’re a friend or stranger, reader or writer, let me say this so there is no misunderstanding; I don’t want to die.

This, of course, doesn’t matter. Our world, without our consent, will end, not with a bang but a whimper.

Other worlds end with a bang but not a whimper and all too soon. We are told black lives matter but repeatedly shown, in a multitude of ways, they do not. In the not so distant past, violence struck like a hammer to our hearts: a movie theater, an elementary school, a church, a night club. If you let it, the evil and hate, the cynicism of society, will convince you no lives matter.

If that happens, what will you do with your one wild and precious life?

In the film “Last Night,” the world ends engulfed in a bright light. There is no scientific miracle, no hero on a rocket. No one survives.

“In addition to the dread is a sort of freedom,” Leah Umansky writes in her book “Straight Away the Emptied World.”

Sometimes I drive and sing wildly out of tune. Sometimes I wonder what if I crash? Is this the song I’ll die singing? I ask myself in the same way I watch apocalyptic films. It’s not the final scene I’m concerned about; it’s the moments before.

The characters in “Last Night” know they won’t make it. The two protagonists, having known each other only for hours, decide to kill each other moments before the world ends. They listen to a crowd countdown the seconds as they hold a gun to the other’s temple.

We know we won’t make it either. So then what? What does dread determine we do?

Let me begin again, this time where I love. My daughters, eight and five, are at school. I drop them off, kiss them goodbye. I return to my unusually quiet home. I wash and fold clothes, empty the dishwasher. This is what I do with my one wild, precious life. Yet, bored by the domestic, I am deeply in love with it, even the piss-mess and stink of the litter box.

In the evenings my children sit on my lap, tug on my arms to anchor me to the couch. At night my cats knead the soft skin of my forearm while I talk with my wife about our day. When I say I don’t want to die, do you feel it more deeply now, when you know the beginning of my joy and not just its inevitable end? Mary Oliver said it so well. “Doesn’t everything die at last, and too soon?”

I tell my daughters I love them: before they go to school, when I pick them up, when they go to sleep. I tell them directly and often, and they return such radiance. It’s a litany of joy, and I dread the silence their loss can bring.

It’s terrifying to love simply and openly, bluntly, but children deserve it. I want to look every child in the face and tell them they are enough. They are worthy. I would tell them every day. They deserve it all.

“Tell me something to make me love you,” the character Sandra says in “Last Night.”

We owe the dead this much, a chance to be heard.

“Tell me more. I want to love you. It won’t be hard,” she continues.

“Often I think we can, if given half a chance, love anyone,” writes Jane O. Wayne.

When the shooter confessed he said he almost didn’t do it because everyone was so nice. It’s the proximity that wounds: the almost, the half a chance.

The shooter almost didn’t do it. Oh god, then he did.

Imagine joy enough not to pull a trigger.

A church. A mosque. A cemetery.

Our sacred spaces are not always safe spaces. We as writers are often called to witness this simple and tragic truth. But if there is any wisdom or modicum of comfort I can offer, it’s that we are not only called to witness tragedy, but joy as well.

“All happy families are alike; every unhappy family is unhappy in its own way,” Tolstoy wrote.

What can we say about that sentence other than how little it understands happiness, or the power inherent in it.

None of us make it.

“‘I don’t want you to go,’ he said, the tears dropping from his eyes, slowly at first, then spilling like a river.”

I don’t want to go. But we’re not at the end yet, we’re in the moments before. We have time to tell each other more.

In the final scene of “Last Night,” the two protagonists lower their weapons. Everything hushes. They kiss. Only the sound of their embrace can be heard. Then the world is engulfed in light. This is how the film ends.

This can be the way the world ends, too. 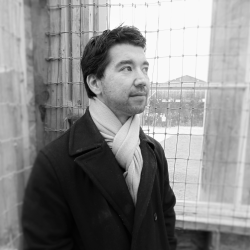 Michael Schmeltzer
Michael Schmeltzer was born in Yokosuka, Japan, and eventually moved to the US. He is the author of Elegy/Elk River (Floating Bridge Press, 2015,) winner of the Floating Bridge Press Chapbook Award, and Blood Song (Two Sylvias Press, 2016) which was longlisted for the Julie Suk Award. A debut nonfiction book, A Single Throat Opens, (a lyric exploration of addiction written collaboratively with Meghan McClure) is forthcoming from Black Lawrence Press and is now available for presale.