In Los Angeles, California the air has a certain quality to it. Light behaves differently here as well. Smog and moisture pair up each day in different quantities to determine the forecast. Sidewalks, concrete walls and highway overpasses show sign of human presence. Graffiti is a constant companion. The city is home to the largest homeless population in the United States. Watch out for scatological debris. Beautiful flowers and thick monstrous foliage line the interstate. From behind the steering wheel of a car, a traffic jam allows for much time viewing the ditch and searching for inner stillness.

One summer, I was granted an artist residency in Chinatown. This area is known as DTLA or Downtown Los Angeles. Miles of industrial buildings loom sleepily–warehouses of decommissioned factories begging for the downtown artist movement to breathe life back into them. After the three-month long residency was over, I decided to stay in L.A. Wanting to make a little history for myself, I sought exhibitions. Some of them hard earned, while others came as invitation.

I kept my studio downtown, but found a job on the Westside in Venice. The commute after work was a nightmare, and I was often too tired to make it happen. Day to day logistics can be tough in a city this size where almost everyone has a car and must use it. Not having much experience with big cities, I was in awe at the enormous population and constant activity. There is immeasurable human history compressed between seemingly endless layers of buildings, landforms, plants, cars and interstate systems. I was enjoying new friends and nurturing connections, but couldn’t shake the feeling of being caged in.

Commuting to Las Vegas nearly once a month, I enjoyed watching the city limits gradually give way to barren desert. It was a shift in thinking; a different state of mind. City life with its complex relationship to the natural world is swept up into the strict order of a new eco-system. The austere and beautiful design of the Mojave Desert appealed to me. When returning to L.A., an omnipresent heavy smog can be observed, looming eerily beyond the San Bernardino Mountains. Around this time, I had a breakthrough in the studio. As with any new movement comes uncertainty. ‘What’s up with the Sky?’ has proven successful on levels both aesthetic and as a true representation of my love-hate relationship with Western mega-cities. 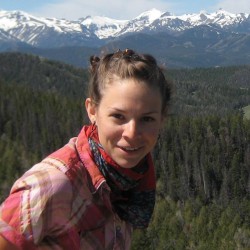 Rachel Stiff
Rachel Stiff is a painter, educator and former all-around cowgirl. During the spring of
1986, she was born in Lewistown, Montana. Rachel holds an MFA from the University
of Arizona in Tucson (2012) and a BFA from the University of Montana in Missoula
(2009). Her work has been shown throughout the West and acquired by the Emmy
award winning Traktor Films of Santa Monica, CA. In 2013, Rachel participated in RAID
Projects, a three-month long artist residency in downtown Los Angeles. After living and
working there for nearly a year, Rachel moved to Nevada. In Las Vegas, her work can
be found in the permanent collection at the Marjorie Barrick Museum and was recently
shown in a solo exhibition at The Winchester Cultural Center. Identifying as a true
Westerner, her work examines the construction of the modern landscape and desert- urban interface through abstraction.