“We have to honor our depression,” my friend Stephen Berg said to me a few years ago. It was a passing remark, the context now lost, but it seemed a profound idea at the time. Later I discovered that the expression had been used by psychologists and therapists (James Hillman perhaps the first) since the 1970s, but I refrained from finding out what they meant by it or what my friend meant by it (likely quite different, Steve being a poet and an original thinker). Instead, I’ve let the notion molder in the back of my mind like an old shoebox in the closet, occasionally bringing it out for inspection.

On the surface, the idea suggests to me that our culture’s approach to depression—as a mental disturbance to be eliminated as fast as possible with feel-good drugs—stifles the important truths our minds are trying to tell us. There are so many things to be sad and upset about that depression in a sense is simple realism. If we gulp SSRIs and play with our smartphones and multitask ourselves into concealing our despondency, what are we missing?

I opened the shoebox again this December, a month that for me has become a depressing lead-in to a dismal season. Why dismal? Partly it’s a touch of what many people experience, the reaction we now call seasonal affective disorder (“prevalence in the U.S. ranging from 1.4% in Florida to 9.7% in New Hampshire,” says a 2007 article in the New York Times). More deeply, winter dismays me because it begins with the holidays we used to spend at my grandmother’s house, the one place I experienced a true sense of family.

When my childhood nuclear family fissioned, my grandparents became the new emotional nucleus, the stable point, throughout my youth and into adulthood. As young marrieds, my wife and I would drive from the big city to Grandma’s small town, children in the back seat, presents in the trunk, looking forward to days crowded with relatives, cheap decorations, ugly sweaters  and foods we would never cook ourselves (potato soup laden with salt and butter!). With Grandma gone and the children dispersed, the winter holidays now seem empty, as fruitless as a cardboard fruitcake. It’s not that I envy those who are celebrating with their families; rather, I kind of wrap them in my own self-pity, feeling sad for them as well as myself, and that state of mind permeates the months that follow.

This year in addition, at the start of winter, I’ve been reading some books with depressed protagonists. Is it stupid to dig into these at this time of year? One is Lauren Grodstein’s latest novel, The Explanation for Everything, in which a widowed biologist finds his trust in science challenged by a student who believes in God. The protagonist, Andy Waite, has been researching the effects of alcohol ever since his wife was killed by a drunk teenage driver. His experiments aren’t going well, though—the mice he carefully tends and then dissects aren’t proving what they’re supposed to prove—and he might lose his funding as well as his chance for tenure. His romantic life is dead, and a female neighbor’s attempt to revive his libido does not go well. He’s a decent father to his young daughters, but otherwise his life seems perpetually on hold.

“Depressed people,” says Wikipedia, “feel sad, anxious, empty, hopeless, worried, helpless, worthless, guilty, irritable, hurt, or restless,” and Andy Waite matches at least several of those adjectives. He might continue in that mode for many more years, but a challenge arrives in the form of Melissa, a Christian student who asks him to supervise her independent study on Intelligent Design. As a scientist, and in particular as the instructor of a course on Darwinism, he considers Intelligent Design a ludicrous attempt to dress religious irrationality in scholarly garb, but Melissa maneuvers him into agreeing to work with her, and the more he gets to know her, the more she undermines his emotional and cognitive foundations. Without quite succumbing to her beliefs, he begins to find them comforting. He reads and rereads passages from a book written by her pastor: “how he was here for a reason, how everyone is on this earth for a reason, and the reason belonged to God.” And without exactly falling in love with Melissa, he finds himself romantically connected, which presents a further threat to his career.

Another book I’ve read recently is Joan Didion’s best-selling memoir The Year of Magical Thinking, a dissection—with as sharp a knife as Andy Waite uses on his mice—of the author’s own deranged state of mind in the year following her husband’s sudden death. Grief, she points out, is a truly disturbed condition, one of both mental and physical changes, and in her case no Melissa arrives with a Good Book of Succor; instead Didion uses her journalist’s work ethic, driven by the need to “get it right,” to catalog and analyze the distortions of mind, body and spirit that she endured. “Grief turns out,” she says, “to be a place none of us know until we reach it.” And when we do all reach it, we will be unprepared, even though she tells us the particular ways we will be unprepared:

“Nor can we know ahead of the fact (and here lies the heart of the difference between grief as we imagine it and grief as it is) the unending absence that follows, the void, the very opposite of meaning, the relentless succession of moments during which we will confront the experience of meaninglessness itself.” (Chap. 17)

Immediately after this passage, she describes how, as a young woman, she found meaning in geology, the “inexorable shifting” of the earth being evidence of some “scheme in action.” Though the scheme she intuited was indifferent, not benign, contemplating it was “deeply satisfying.” This recognition in turn gave significance, in her mind, to a key passage from the Episcopal litany: as it was in the beginning, is now and ever shall be, world without end.

That line is not exclusive to Episcopalians, of course; translated from the Gloria Patri, it appears in many other Christian doxologies. I remember it from Christmas Eve services, held just before midnight, at my grandmother’s Lutheran church, and though I’m as much a nonbeliever as Joan Didion and Andy Waite, I found it both comforting and inspiring. In a typical translation, the “world without end” line is preceded by “Glory be to the Father, and to the Son, and to the Holy Spirit” and followed by “Amen”—an appropriate Amen, since after glorifying the world without end, what else is there to say?

As Didion suggests, there’s solace in this evocation of the eternal, whether you connect it with a god or not. It has always been thus. It ever shall be thus. What’s the point, then, of complaining? And isn’t there some beauty in the fact that it all goes on forever (at least until the asteroid hits)?

Grandma’s small-town Lutherans, gathered on a cold Christmas Eve in a drafty church, creating warmth by their massed human numbers, would chant world without end, amen in unison. To me they felt—all these people I saw only once a year, the bald, the fat, the sniffly children, the sexy young mothers, the bored teenagers, the starched businessmen—like extended family. I imagined that by gathering together for ritual we resisted the encroaching freeze outside. For those few moments I believed in these people’s essential nobility, no matter what bastards they were in their daily lives. I believed that human suffering had dignity. I believed there was some point to existence, even if I couldn’t define it.

To conclude the service, we would light handheld candles, each person passing the flame to the next, until the entire sanctuary glowed with tiny lights—for just a minute or two, until we snuffed them out.

These brief flashes of meaningfulness have surprising influence in our daily lives, like an energy bar that keeps us going through the lean times. But for me it’s difficult to recreate them without the congregation snugged in surrounding pews, and especially without Grandma’s hip next to mine. The meaning arises from the people.

Where is all this taking me? To a recognition, I guess, of the courage it takes for all of us to plow through the unavoidable winters of the body and spirit. Joan and Andy and the rest of us—we’re actually pretty brave, aren’t we? Perhaps acknowledging this stalwartness, even celebrating it, is one good way to honor our depression.

And this is something literature can help us do. Maybe it’s not so silly, then, to read books about depressed people in the winter.

Okay, bring them on, the grim tales. With a mug of cocoa, please, for extra comfort. 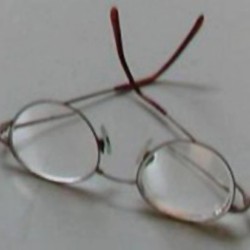 8 thoughts on “Guest Post, Sam Gridley: Literature and the Season of Depression”