My sophomore year of college, I wrote my first good story. Or I should say, for the first time I enjoyed writing a story and didn’t want to hide in my dorm room once other people started reading it.

But as soon I finished the story, I couldn’t get back the feeling I’d had while working on it—the sense that something glittery and magical was happening, that the characters were coming to me fully formed, that the story itself was mysterious to me and yet familiar and easy to tell.

I went to my writing teacher in something of a creative panic, and what she told me sounded reassuring: “It can be a long time between stories, and the wait can be difficult.”

I wrote down her words with the reverence of a disciple for her guru, and I felt comforted with the thought that a good story would come again. I just had to be patient.

The problem was that while “waiting” for the next story, I wasn’t actually preparing for its arrival. Sure, I jotted notes in my journal, copied bits of overheard dialogue, and wrote the first pages of dozens of possible stories, but I stopped short of ever writing past the point when inspiration ended and boredom with my idea set in.

It took six more years before I completed another story. By that time, I was teaching middle school and making my students write essays and stories from beginning to end and then, on top of that, revise them after the first draft. It seemed hypocritical to ask twelve and thirteen-year-olds to sit through the hard part of writing without doing it myself, so very slowly, one sentence at a time, I hammered out a story about a failed painter struggling to forget the memory of the New York plastic surgeon who had fixed her nose and then betrayed her heart.

Spoiler alert: it was a terrible story. Stilted language, heavy-handed plot, and—despite what the ridiculous description above might suggest—utterly devoid of humor. I put away the story and hoped it would never find an audience.

And then I kept writing. Because while that story taught me that I was capable of writing badly, I also learned how to stay at my desk when I really just wanted to get up for another cup of coffee. That’s the kind of waiting I think my teacher was talking about—more prosaic than the lightening storm of creative inspiration I once expected, but also more practical for someone who wants to make a long career out of writing.

I continue to write terrible stories—though hopefully not terrible in the exact same way. I continue to want to warm up my coffee or look for jobs in countries where I don’t speak the language—basically, anything aside from writing that next scene in a story I’m struggling with. Every once in a while though, because I’ve been waiting for the story by actually writing and revising it, a more fluid process takes over, and the characters suddenly know who they are, where they live, and what to say to each other. It’s a pleasantly familiar feeling, and yet it always catches me by surprise. 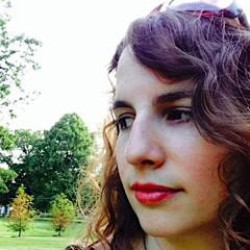