Dada or dadaism. A European art movement that began in Switzerland in 1916. Thirty eight million people died as a result of “The war to end all wars.” Also known as World War I. The Dadaists declared “The world is insane and so we shall be insane with our art.” The movement did not last that long, some say only until 1923. A century later the reverberations of what those artists did with painting, sculpture, film, music, writing and theatre still resonate.

As a child I saw a book about the Dadaists and their art. I was fascinated by the photographs of the work. I loved what they did. I still do. They influenced me in my life as an artist and beyond. They taught me that the art that you make does not have to have comprehensible meaning.  It can but it doesn’t have to. Non-sense in art is also worthwhile.

This is a work of collage and mixed media. There is a lot going with the imagery. It seems crazy and haphazard. It is, but it isn’t. I borrowed heavily from imagery found in grammar school science books of the late 1950s and early 1960s. In the end it does not matter what meaning or message I ascribe to it. You the viewer will interpret it as you choose. I like that.

An early work of mine done sometime in the late 80s then revisited in the early years of this century. The face shown is that of the Statue Of Liberty before it was assembled in New York City. The word EAT refers to the strange 19th century American practice known as Manifest Destiny. It put forth the idea that we as a nation were destined to move from one shore to another creating a large country. Like locusts moving en masse devouring everything in their path discounting the rightness or wrongness of that action and the damage it caused. The vertical signage that reads “amburgers” was an actual cafe sign found on the roof of local diner here in Phoenix. Regardless of what I say it’s meaning is, it is still one of the strongest images I have done.

One of the practices of the Dadaists was to use objects that already existed, assembling/constructing them into secondary objects that had altogether different uses or meanings. That is what I have done with this piece. If there is meaning to this work then it has much to do with an American mythology and vision that defies simple patriotism and instead embraces a strange, human spirituality.

Also made of “borrowed” objects culled from the world around me. This seemed like an exercise in strong composition and simple texture to me. However after I completed/created it I realized that it possessed a very intimate and personal meaning to it that I had not knowingly intended. It is about the death of our first child almost thirty years ago. I believe my subconscious mind was talking very loudly here.  Now when the Dadaists movement emerged it had been less than ten years since Freud’s theory of psychoanalysis had come to light. I believe that Dada embraced the language of the subconscious mind (or as Carl Jung referred to it: the unconscious mind.)

Another mixed media/collage piece. This one measures six feet by five feet by two inches. The strange looking, winking flower, human like face, is an emblem from a report card I received while attending elementary school in Derby, Kansas in the late 1950s. The rest of the imagery in the work is a mix of illustrations and schoolbook text pages from those days and actual, original, homework assignments that I did as a child in and around 1957-59. Therefore this is a collaborative piece of art made by 21st century me and six year old me. 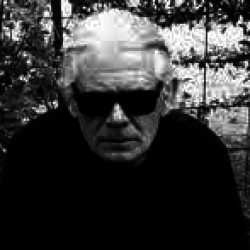 Jeff Falk
Jeff Falk began making art in 1973 with his first oil paintings. Before long, he discovered he was better able to deliver his vision using mixed media. In the early 1990s, Falk began working with collage, which he feels is an extension of painting. Falk, a native of Nebraska who was brought to Arizona as a child in 1959, has been an active participant on the Phoenix art scene since 1984. His work is in the collections of the Tucson Museum of Art; the City of Chandler, Arizona; Phoenix Sky Harbor Airport and Mesa Contemporary Arts.