Christmas was filled with a different light that didn’t filter through the rest of the year, sent electric shivers through the complacent houses up and down the block. Anything was possible. We made the pilgrimage to pick out the exquisite tree as soon as December hit. My siblings and I argued over which tree was the tree until Dad said ‘This is it.’ Then the guy who worked there, cut off the bottom while Mom collected boughs to place on the mantel and around a candle on the dining room table. The tree was strapped to the top of the station wagon and everyone was smiling, even Dad. We spent that night decorating, with Mom leading the way. The pulsating large, multi-colored lights blasted around the picture window and the tree until nothing was stagnant in our house. Our faces flickered on and off in flaming reds, blues, greens and yellows. Mom was somebody else during the holidays, a treasure chest filled with some kind of happiness and brilliance that blazed out of her being. She would put on the Dylan Thomas scratchy album “A Child’s Christmas in Wales,” and we’d all hover close by with the throbbing neon bulbs illuminating our faces as we listened to that lilting waver of a voice that sounded like crashing waves against rocks from a distant planet.

Our neighbors and my older brother and sister went to the midnight mass, smoked cigarettes and drank whatever they could steal from their parent’s stash that night, while the rest of us sat in the living room, stared into a space that believed everything could change like the glistening snow and the charged air and rainbows that rearranged the tragic misery of that room. Mom chugged her glass of wine and laughed, sat back in her recliner as the deceptive varnish of fresh snow and glittering lights through the night air wedded all of us to a holiday season packed with expectation.

The brutal realm of day-to-day existence had multitudes dissociated, walking back and forth through malls with bags full of ridiculous crap they would never think of buying at any other time of year, unless they were under the gun, which ‘twas the season. Thank god for wrapping paper. Even a package of Hanes underwear looked much better in a box under a bow.

It was a state of siege that had me engulfed in that anticipatory surge of life that came with sledding, snowball fights, transient lights and music. Tearing open presents always rocked more than what was beneath the ribbon and paper. It was this belief that inside one of those presents was the promise of another life. The reality was that a week later, snow was gray and yellow, gifts were forgotten, and parents, school, neighborhood and myself were still there.

And so what about the special delectables? I’d always assumed Christmas snacks would come through with what they promised and why wouldn’t I? They had never let me down. Yes, I sat in the lunchroom when I was eight, psyched that instead of a few Fig Newtons glued to each other, my mom had packed an exquisite Twinkie for the holiday. Now that was golden!  The outside was peachy and euphoric in the phallic shape of dessert ecstasy, but when I took that first bite of a third of the submarine, I realized something was wrong. It was grainy like when you get smacked by a wave in the lake and come up with sand in your mouth. The thing about a Twinkie was that when you bit into it your eyes close automatically. It was only for one sense to absorb. The sad part was that when I opened my eyes to look at the two-thirds left of my spongy delicacy, I was face to face with the color green puffing out of the center. Not a pastel green or an olive green, but the Christmas evergreen that had no pretense of hiding its ornamental beauty from anyone. I was positive I turned a green that gave away the Irish half-breed of me as I imagined what the rest of the tasty treat was doing now to my stomach and my brain. I was sweating and nauseated when Maggie Felsteder asked if she could finish the remnants of the Twinkie I was stuffing into my brown paper bag. I never liked Felsteder. I started to feel a little bit better at that point. Yeah, sure, I said, as I launched the torpedo at her from the unbitten end.  Merry Christmas. 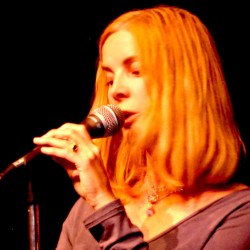 Meg Tuite
Meg Tuite’s writing has appeared in over 300 journals including Berkeley Fiction Review, Epiphany, Superstition Review, JMWW, One, the Journal, Prick of the Spindle, Monkeybicycle and Boston Literary Magazine. She has been nominated nine times for the Pushcart Prize and has been a finalist in the Glimmer Train short story writer’s contest twice.